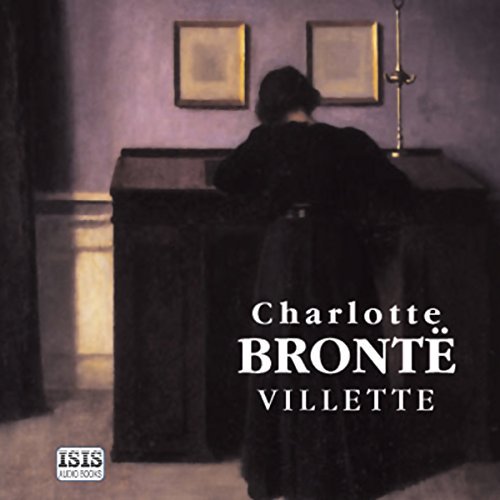 With neither friends nor family, Lucy Snowe sets sail from England to find employment in a girls's boarding school in the small town of Villette. There, she struggles to retain her self-possession in the face of unruly pupils, a headmistress who spies on her staff, and her own complex feelings: first for the school's English doctor and then for the dictatorial professor, Paul Emmanuel. Villette, Charlotte Brontë's last and most autobiographical novel, is a powerfully moving look at isolation and the pain of unrequited love, narrated by a heroine determined to preserve an independent spirit in the face of adverse circumstances.
(P)2005 Isis Publishing Ltd.

My reading experience was definitely hindered by the chapter sections not being accurate. After reading from my physical copy, it was so difficult to find my spot in the audiobook because the chapters aren't divided correctly. It was really frustrating! However, Karen Cass's voice was so soothing to listen to and she captured the characters' personalities so well!

A change of career!!

This breathtakingly beautiful work by Charlotte Bronte took me to new and unknown vistas.Her portrayal of the complex young school mistress in the French school was touching but also full of brave dignity. What a sweetly sad tale.
Karen Cass is a reader of significant talent and her interpretation of the various individuals in this story were strong and consistent.Her use of the French language is impeccable and a joy to listen to. My sincere thanks for a glimpse of the inner and outer worlds of Lucy show

Charlotte Bronte at Her Best

The Bronte sisters followed the writer's golden rule: "Write about what you know." Their limited but intense life experiences informed their fiction. Villette is IMHO, Charlotte Bronte at her very best. She is in command of her craft. In her most famous work and a favorite of mine, Jane Eyre, she used some tricks to move the story such as the unknown voices to bring Jane Eyre back to Mr. Rochester. Villette's Charlotte didn't need any tricks, just straight honest writing.

In a scene in "Mr. Holland's Opus", Mr. Holland tries to explain to the lead singer how a particular Gershwin song should be interpreted. He said it expressed the "yearning to belong" of the young woman. While mostly unspoken, that same heart rending yearning is the soul of this work. I think Karen Cass's particularly wonderful performance made the raw heart-felt emotions of Lucy Snow accessible, even more so than the book. This emotion is understated but it is always there and one instinctively knows it runs deep. Ms. Cass also highlights those little flashes of Bronte humor which are not always apparent to a thick headed lug such as me.

I am always struck how a Bronte heroine can take a punch, then get up, put themselves in order then go to face life's next challenge. They are not lachrymose. I think the Bronte sisters were cast from the same high grade metal. Charlotte Bronte left the ending to the reader's discretion. If I was doing the movie, I know the ending.

Exclellent, but brush up on your French...

Nicely read and very enjoyable. The narrator uses very clear yet subtle 'voices' when speaking for each character which allows you follow who is saying what without it being distracting. It helped that I had a little knowledge of French. Realistic to the setting, many characters' comments are literally in French. Nothing critical to the plot, but in my estimation, would leave a lot of annoying gaps if I couldn't understand what was being said.

I am furious that no mention was made of the fact that if a reader does not speak or understand french, the book is a complete waste of money. The story as usual is excellent, but there was no sense in continueing to read if half the story was being lost.
I strongly suggest that you let you perspective know about this problem.

The narrator is very pleasant to listen to and interprets the characters with excellent voices. It flows well, however it contains portions with a lot of French which really affected my understanding and enjoyment of the book. Charlotte Bronte's beautiful way of constructing her sentences is a lost art today.

A Must Read for Young Women

This book is still as timely as ever.

Read only if you know French

Besides the book not having any plot, I was continuously frustrated by the extended conversations in French with no author interpretations. These weren't slight exclamations or one-word French messages, these were complete conversations that the reader cannot comprehend. Except for the poetic writing, this was a waste of time. I was entirely disappointed.

I've listened for six hours now, patiently waiting to feel something for this heroine, but I must admit I'm bored and want to slap most of the silly little French girls she can't escape. I don't speak French, so I imagine I'm missing a lot. Since there are thirteen hours left, I'm afraid Miss Snowe will just have to finish her adventures by herself...