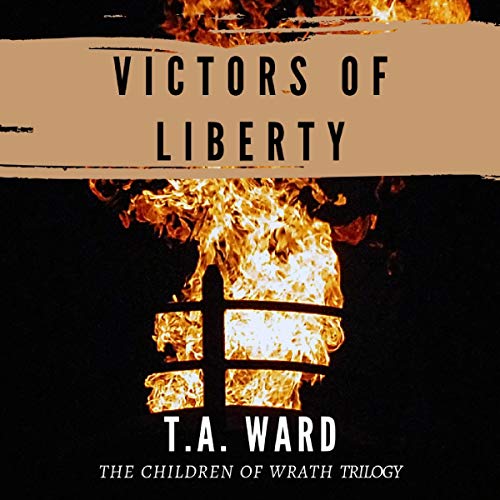 In a world blighted by Obcasus gas, no war is fair.

The United States has been plunged into a moral darkness unmatched in its entire history. When totalitarian President Bryan Powell issues a universal death penalty for all living inexorables, war, or surrender become the only choices for the cohort struggling to topple his regime. Even worse, A.K., the symbol of hope for the rebellion and the world’s first cured Inexorable, begins to buckle under the dark and deadly burdens of war when his comrades need him most.

Darkness lurks just as much inside of A.K.'s own mind as it does in the outside world. If the cohort has any hope of survival and A.K. has any chance of winning the war his father began, sacrifices must be made, lies must be told, and betrayals must be confronted head-on. Victors of Liberty is the final book in the Children of Wrath Trilogy.

What listeners say about Victors of Liberty

Thrilling end to the series

This last audiobook in the Children of Wrath series is filled with emotion, surprises, action and hope. It has some great twists, thrilling action and heartbreaking moments, and it wraps up all the story threads well. A great finish to the series. The narration suits the book well, does a great job of all the voices and makes everything seem real. This is an excellent series with a unique storyline that feels real and personal, it has you holding your breath, wrenches at your heart and is full of tyranny, betrayal, manipulation, love, hope and determination all at the same time. It has characters you connect strongly with and you become totally invested in their struggles and survival. A great book and series, well worth listening to or reading.

This series is so good

Victory of liberty had me on the edge of my seat. I stayed up all night to finish the book. To see how hard they fight for the cause and how they defend each other is about the only heart warming thing in this book. To see things come to an end was bittersweet.

T.A. Ward has created such interesting charaters in these books that you just can't help but need to know how it ends. While these books are fictional and written about a place that doesn't exists they are written so realistically it feels like you are listening to AK read his biography to you with a couple guest appearance chapters by others in his life. Desmond Manny does an excellent job with his narration, he talks how I would imagine AK to talk. I really enjoyed this third book. Because I despise writing and reading spoilers in reviews it's a bit hard to say all the reasons why. I will say there is just so much in it that is so basically human and relatable that it just really made for a great listen. You can feel what the characters are feeling, you can relate with their emotions and see their motivations and empathize with them. I was given a copy of this book to review for my honest opinion.

Would highly recommend this series to anyone.

This was a great end to the trilogy. So highly impress with the Author and the Narrator. Everything was so highly professionally done and read beautifully. The story and world build was so unique, yet so real. You connected so strongly with all the characters, you wanted to see them find peace. You needed to see them survive.

That twist, I did not see coming. So brilliantly done. Would highly recommend this series to anyone.

I really loved the last 2 books and it took awhile for this book to come out. Even though there was a gap in time from the 2nd to the 3rd book this one took me by surprise. The narrator changed and my first thought was uh oh but I kept listening and this narrator won me over. I say this because I know some will immediately stop listening when they realize the narrator isn't the same one. Please do not stop as this narrator did his job very well and I ended up again engaged with the characters and wanting to see where the author was going to take us. The author did an amazing job again in the book. There was plenty of action and me trying to guess where the characters were going to end up. There were areas that shocked me and other parts I start to yell at and or cheer the characters on. The narrator gave them life and really did a fantastic job. Once I was in a couple of chapters I didn't want to stop listening, but for life i.e. work and sleep, I wouldn't have. Great addition to your library and great addition to this series!

An epic conclusion to the Children of Wrath series!

This book is action packed and kept me on the edge of my seat. The revolution is coming, but it may be doomed to fail. Not everyone can be trusted... it seems that there may be a mole in the cohort. Will the truth of the cure ever come out?

A fantastic conclusion to a thrilling series. I would love to see more from T.A. Ward.