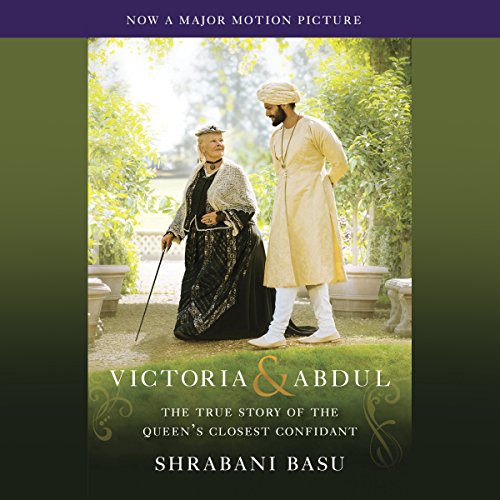 History’s most unlikely friendship - this is the astonishing story of Queen Victoria and her dearest companion, the young Indian Munshi Abdul Karim.

In the twilight years of her reign, after the devastating deaths of her two great loves - Prince Albert and John Brown - Queen Victoria meets tall and handsome Abdul Karim, a humble servant from Agra waiting tables at her Golden Jubilee. The two form an unlikely bond and within a year Abdul becomes a powerful figure at court, the Queen’s teacher, her counsel on Urdu and Indian affairs, and a friend close to her heart. This marked the beginning of the most scandalous decade in Queen Victoria’s long reign. As the royal household roiled with resentment, Victoria and Abdul’s devotion grew in defiance. Drawn from secrets closely guarded for more than a century, Victoria & Abdul is an extraordinary and intimate history of the last years of the 19th-century English court and an unforgettable view onto the passions of an aging Queen.

"A tale of Empire and intrigue, brought vividly back to life." (Vikas Swarup, author of Slumdog Millionaire)
"If this had been the plot of a novel, it would have been dismissed as foolishly far-fetched. But Victoria & Abdul is fact rather than fiction, and therein lies its power." ( The Times of India)

What an incredible story. I saw the movie which I enjoyed but the book fills in all the gaps. I’m surprised that the story is not better known but then with the future Kings paranoia, all letters, photos and documents were destroyed. I loved this book which gives a good account of the royal court at a time when the queen befriended an Indian and took him into her confidence much to the chagrin of her inner circle. Well written in a documentary style, I would recommend this book to anyone with an interest in history, royalty, the love of a friend and just a general good story.

I bought the book after seeing the movie’s preview because we all know the books are always better. But I can’t bring myself to finish this one. It’s dry. There is no flow to the story or reading of it and with the diary inserts it becomes repetitive. Abdul sounds like an obnoxious prat over time. I really wanted to enjoy this story but alas...

Like the story and reserarch behind it; hated the bogging down by details

all about the same

no ; reading the book was enough, but the movie would move infinitely faster

With 20/20 hindsight, I'd see the movie instead

what a great story!

I found this to be so interesting. I had never heard of the relationship between Queen Victoria and Abdul. it's a fitting story for what's going on in the world today, with Muslims being portrayed as evil. Some things never change.

Not For An Audio Book Newbie

This is the first non-self help audio book I listened to and I regret it. I just finished the movie and was inspired to read the book it was based on so I bought it through audible. I did not even read the reviews on it, just got it on impulse. And I am new to this whole audio book thing, but I am an avid reader.

I'm not sure if it's because I prefer listening to self-help audio books than reading them. The listening part makes it more real and more inspirational for me. But other genre's seem to be better being read, the audio part makes me feel sleepy and I zone out and miss some parts.

The performance was boring. It was the storyteller's voice that put me off, she had a very sleep inducing voice. The tone is boring and the tempo was too slow for me. Add the part where she tries to do a fake Hindu accent, or Royal accent, it was too try hard. I will not listen to any other audio books she narrates. The writing was good though, the author was able to paint a pretty picture. I might pick up the real book and read it this time.

I will try to download another non-self help audio book just to see if it's for me. But due to this book, I now definitely check the review on the books, especially on the storyteller's performance.

Enjoyed this book. So much to learn about the relationship between India and Britain. I want to know more!

The book seemed well researched, but was sometimes repetitive. I didn't always appreciate the author making conjectures about how people felt in different moments. it would have been nice to know a little bit more about the primary sources that she used.

Interesting, but I just couldn't finish

I am extremely impressed with the screenplay script writer because I thoroughly enjoyed the movie!

I enjoyed this book from cover to cover is fascinating time. Fascinating relationship very interesting

struggled to finish this, story was quite repetitive and doesn't create the interest I had hoped for in the topic.

A wonderful, sad and moving story, well written and narrated. Very enjoyable. Would definitely recommend. I'm sure I'll read it again. It has given me a taste for historical stories of the royals.

Is This a History Lesson?

I tried and tried to get into this audiobook. I found the narrator didn't put much feeling into the reading, not enough emotion. As she introduced the travelling of the characters to different countries and areas It kept going back to what places used to be called and the wars that had taken place, which I thought had no relevance to the story. It didn't grab my attention and I wanted to get into the dialogue between Queen Victoria and Abdul and what they did together. I do believe the true story is a very interesting one but I couldn't get over all the history being told. Not for me.

I loved listening to this book. I couldn't help but think back to those times and wonder what they were like!!
It made me look back at our nation's history

Having watched the film it was good to hear the true story behind it all.