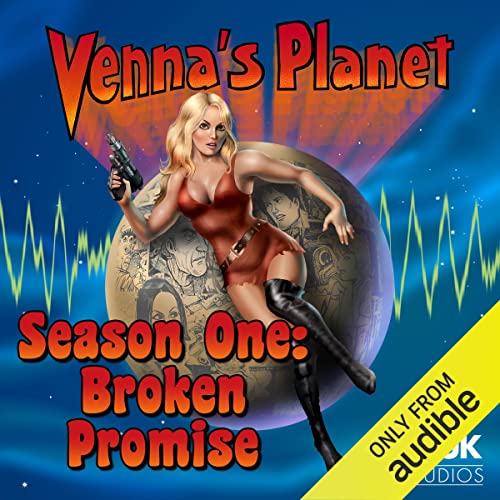 Venna’s Planet is the story of Venna 8632, a strong-willed, highly skilled, soldier-drilled woman on a mission in outer space, where gravity keeps you perky and the future appears to be rather retro. She’s a crew member of the Suntreader, which has been travelling for 50 years (mostly with her occupants in cryogenic hibernation) in order to find a new planet to colonise.

Tired of playing shoot ’em up with aliens, Venna yearns to settle on the newest planet the Suntreader has been orbiting - a world they have named Promise. Unfortunately, the only promise Venna is living on is the continuation of a futile war with the current inhabitants - the Krogs...and that’s reached somewhat of a predictable stalemate.

Combining the episodic thrills of classic film serials such as Flash Gordon or Buck Rogers with the free-wheeling 1960s spirit of Barbarella, Venna’s Planet is a full-cast audio drama adapted from the popular graphic novels written by Robin Evans.

This collection contains all the episodes from Venna’s Planet: Season One - Broken Promise.

What listeners say about Venna's Planet: Season One - Broken Promise

As a fan of Mr. Evans graphic novels, I was thrilled to learn of an audio book of the intrepid but unlucky star traveler. The cast did a tremendous job and the adaptation was simply marvelous! if you need a break from our insane planet, Venna's Planet is for you!