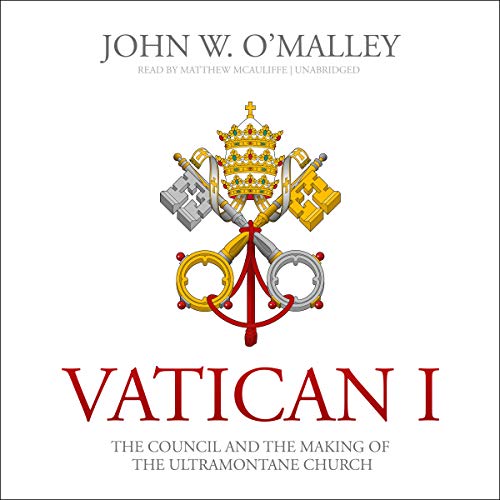 The enduring influence of the Catholic Church has many sources - its spiritual and intellectual appeal, missionary achievements, wealth, diplomatic effectiveness, and stable hierarchy. But in the first half of the 19th century, the foundations upon which the church had rested for centuries were shaken. In the eyes of many thoughtful people, liberalism in the guise of liberty, equality, and fraternity was the quintessence of the evils that shook those foundations. At the Vatican Council of 1869-1870, the church made a dramatic effort to set things right by defining the doctrine of papal infallibility.

In Vatican I: The Council and the Making of the Ultramontane Church, John W. O'Malley draws us into the bitter controversies over papal infallibility that at one point seemed destined to rend the church in two. Archbishop Henry Manning was the principal driving force for the definition, and Lord Acton was his brilliant counterpart on the other side. But they shrink in significance alongside Pope Pius IX, whose zeal for the definition was so notable that it raised questions about the very legitimacy of the council. Entering the fray were politicians such as Gladstone and Bismarck. The growing tension in the council played out within the larger drama of the seizure of the Papal States by Italian forces and its seemingly inevitable consequence, the conquest of Rome itself.

Largely as a result of the council and its aftermath, the Catholic Church became more pope-centered than ever before. In the terminology of the period, it became ultramontane.

A number one Amazon.com best seller in Christian canon law

What listeners say about Vatican I

The content of the book is outstanding. I learned a good deal. This book sheds light on certain perennial problems in the Catholic Church today. NB: The reader's consistent inability to pronounce properly terms and titles in languages other than English was highly distracting.

As someone with no background, this was helpful

I seriously considered not writing about this book. Vatican I is an area that I have almost no background knowledge, so I cannot comment on the quality of the book. I had a friend recommend to me another book by John O'Malley, and as I was saving the book to my future reading list, I saw that Vatican I was free to listen to in Audible because of their new member benefit.

Luckily, nearly half of the book was about the history and cultural influences that led to the start of Vatican I. So the book seemed to place the context of the subject well so that even someone like myself can benefit. Vatican I did not end, the Franco-Prussian war moved to Rome, and the council was evacuated. Officially Vatican I did not end until the start of Vatican II. Several of the decisions of the council may not have happened if the schedule had been different. There is quite a bit of criticism of Pope Pius IX, but that criticism also seems tempered from how strong it feels like it could have been.

As a Protestant who wants to have a good relationship with the Catholic church and who is unlikely to become Catholic for several reasons, Vatican I, and that general era it is part of, is what concerns me. I am not a fan of Papal Infallibility, although more in theory than practice. From what I know, it has not been 'abused' much, and I generally, I object to how it could be misused more than anything else. And I am not a fan of the concept of the Immaculate Conception, although I know that wasn't part of Vatican I, but an earlier statement by Pope Pius IX, because it seems unnecessary or not a complete solution.

(At some point, it is God's work that brings about sinlessness. So if Mary must be conceived in sinlessness, then why not her parents as well and further and further back. A more straightforward solution it seems to me, as a non-Catholic without a good understanding of the logic of the immaculate conception, is that if sinlessness is essential, that the nature of Christ bringing about forgiveness of sin, brings about Mary's forgiveness of sin. In other words, Jesus had the power to forgive sin before his death and resurrection, so why could not the simple forgiveness of sin happened without a miraculous conception.)

Because the council ended early, the more extensive work on the nature of the church, of which the concept of Papal Infallibility was just a small part, was never approved. There were several other ramifications of Vatican I. Still, O'Malley emphasizes that you cannot really understand Vatican I without understanding Vatican II, and I need to do some more work to understand Vatican II. Overall I thought this was helpful, and most of the time, it was clear enough that there were not too many concepts that I was unclear on, but for me, this was almost totally new material.

The author provides a detailed introduction and a thorough evaluation of the political, theological and historical frame of Vatican I. I want to encourage producers fervently to hire narratives who are familiar with foreign languages - especially when it comes to academic works. It is disturbing to hear German utterly butchered and not being able to distinguish Latin from Italian or French. If you want to publicize academic work you could start by honoring its international character. At least get a producer who can guide the narrator. Book A, narrator F.

Very interesting history. Well written
The narrator clearly doesn't speak French and his Latin pronounciation was spotty. But the French used in the book is not essential to understand.

My knowledge of Vatican 1 was rather lacking prior to listening to this book, so O'Malley's book was fascinating. I may be a hard-core Protestant and I may loathe Ultramontane theology, but this book was incredibly valuable in helping me understand how Rome came to adopt this doctrine. The development of this doctrine is far more complicated than I understood, but O'Malley's book helped give me the historical perspective on how this doctrine came to be dogmatized.

I'm Protestant and I Very Much Enjoyed This

Fantastic book, very balanced and sympathetic in its approach to both sides of the conflict. The author did well in sustaining his commitment to his faith without treating the subject in an ahistoric manner. All in all a very enjoyable experience and I'm sure to be buying the other books by O'Malley

Fr. O'Malley combines first-rate historical research with a natural nose for human drama. The result is an even-handed, though unblinking, account of a Council that very much affects us today. I couldn't help but note certain analogies between late 18th Century and early 21st Century.

An absorbing account only slightly marred by the reader's inability to pronounce French/Italian/German references.