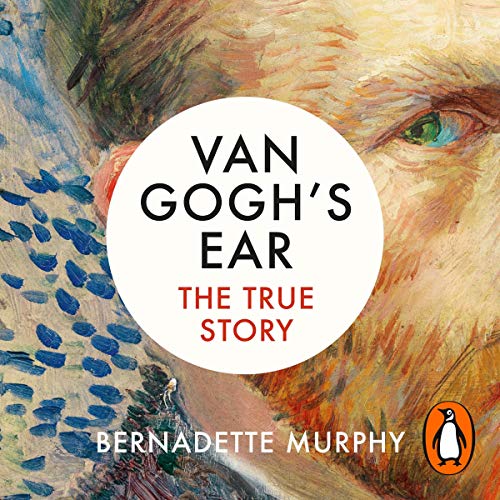 On a dark night in Provence in December 1888 Vincent van Gogh cut off his ear. It is an act that has come to define him. Yet for more than a century biographers and historians seeking definitive facts about what happened that night have been left with more questions than answers.

In Van Gogh’s Ear Bernadette Murphy sets out to discover exactly what happened that night in Arles. Why would an artist at the height of his powers commit such a brutal act? Who was the mysterious 'Rachel' to whom he presented his macabre gift? Was it just his lobe, or did Van Gogh really cut off his entire ear? Her investigation takes us from major museums to the dusty contents of forgotten archives, vividly reconstructing the world in which Van Gogh moved – the madams and prostitutes, café patrons and police inspectors, his beloved brother Theo and his fellow artist and house-guest Paul Gauguin. With exclusive revelations and new research about the ear and about ‘Rachel’, Bernadette Murphy proposes a bold new hypothesis about what was occurring in Van Gogh’s heart and mind as he made a mysterious delivery to her doorstep that fateful night.

Van Gogh’s Ear is a compelling detective story and a journey of discovery. It is also a portrait of a painter creating his most iconic and revolutionary work, pushing himself ever closer to greatness even as he edged towards madness – and one fateful sweep of the blade that would resonate through the ages.

This book was quite hard to put down! It was so thorough and set such a scene I felt transported into Vincent's life. I feel as though I know more about many of Vincent's pieces now such as where Vincent was when he completed certain pieces, his mental state and inspiration at the time. Highly recommend!

It was a great experience listening to this book. I do like to thank the author for her determination and perseverance to finish the book.
Now I see his paintings from a new perspective.

I found this a fascinating read and was in awe of the in depth research Bernadette Murphy went to to get the real truth of this lovely but troubled man.

I read this for a presentation I'm doing on Van Gogh and was happily surprised to realize I had chosen a thoroughly researched book, from an author that dares to question many assumptions about the famous painter.

So much of the hearsay and misinformation spread about Van Gogh lives on today, but Bernadette Murphy's patience and determination in pursuing every little detail does pay off and she corrects many fake assumptions.

Well worth a read/listen too if you are a Vincent tan enjoyed every second of it.

I found myself in great sympathy with the situation Van Gogh found himself in and with connection and great love shown between these brothers.

Feel a real connection with the artist after this. Good book. But Narration stumbles in places.

Bought this after seeing the TV documentary. The book gives more detail on Van Gogh’s life which is great. You come to know him more as a person. I think I would have liked more background on the author herself and even more detail on the processes involved in getting the material (though she does explain a lot). I liked the narrator’s voice which is actually quite similar to the author’s own voice but a few times the narrator seems to lose her way in longer sentences - placing the emphasis on the wrong word and thereby causing slight confusion for the reader. But it’s only a minor annoyance. The narrator also doesn’t pause appropriately when switching from narrative to words inside speech marks - so you’re sometimes unclear ‘who’ is speaking. That’s a bit annoying. I may buy the hard copy version and re-read.

Well research and fascinating. Changed my thoughts about one of my favourite painters. Sadly let down by the reader who reads all the English text extremely well...and then totally ruins the overall experience by totally lacking in linguistic ability. Both French and Dutch pronunciation painful in the extreme. Sad.

Written like a thriller, I loved the concrete details, in depth analysis and remarkable detailed historical research that flesh out the story of Van Gogh, his relationships and environs.

This book captures the thrill of research and explodes many posthumous myths about its subject. However, I was really sorry I had not read it in hard copy as the narration here is of incredibly poor quality. The pronunciation of the French is all over the place, but worse, the reader's emphasis is frequently wrong and her delivery is weirdly staccato, making it very difficult to understand an already complex story. I'd be livid if I was the author as this wonderful book deserves better.

This is an inspired work, the detail gone into amazing. If you like Vincent van Gough you will love this - the real story of his life & paintings.

Wonderful story but so hard to listen to!

Would you consider the audio edition of Van Gogh's Ear to be better than the print version?

There is rather too much about the author's search; more needed about Van Gogh rather than the author's difficulty in catching a certain train. The audio edition is so hard to listen to, as the reader constantly emphasises the wrong words, and mispronounces words as well. If I could return it, I would.

Would you recommend Van Gogh's Ear to your friends? Why or why not?

Not as an audio book.

The reader actually makes it hard to understand, by putting emphasis on the wrong words, and mispronounces words like 'decade' as 'decayed' with the emphasis on the second syllabub.

Bernadette Murphy has lived in Provence for 30 years and has immersed herself in researching the true story behind van Gogh cutting his ear. The received version is that in one of his recurrent periods of mental instability he cut off just the lobe and presented it to a prostitute called Rachel at the local brothel. Through painstaking research and dogged worrying away at her subject - and her fluency in the French language - she has scotched the myths and shown that van Gogh did indeed cut off his entire ear, and presented it to Gabrielle (the 'Rachel' of the myth) who worked as a general cleaner in Arles, including the brothels. Murphy explores in detail the forms of mental illness which blighted the entire van Gogh family, and in particular the delusions which plagued Vincent leading him to believe that he was a Christ figure, which explains exactly why he presented Gabrielle with the newspaper-wrapped ear addressing the startled young woman with words echoing Christ at the Last Supper.

This is an important work in van Gogh studies with plenty of new material. Murphy also corrects the myth about the petition which was organised to evict van Gogh from the Yellow House in Arles, and explains her understanding backed up by letters and details from the paintings themselves of Gauguin's unsuccessful stay with van Gogh. Along the way there are many extremely interesting and finely researched topics including prostitution in Arles, treatment (such as it was) for mental illness, the role of absinthe drinking, as well as insightful analyses of van Gogh's paintings.

Murphy has chosen to include herself and her arduous pursuit, and some of this could have been usefully edited out as it can become bogged down in detail interesting only to herself. But generally, her choice to include herself does make the story hers as well as van Gogh's which adds another dimension.

If I were Murphy I would be deeply disappointed at the choice of narrator whose worst offence is her French pronunciation - and inevitably there is a great deal of French language for her to mangle. WHY was a fluent French speaker not chosen as a narrator? Even when the French accent is acceptable, it is clear that Su Douglas is not comfortable or fluent but, more seriously, she makes a catalogue of truly dire errors which really do spoil the whole narration. 'La place Lamartine' in Arles is repeated many times and at least twice, the narrator calls it 'Plaice Lamartine' which is unforgivable. A turkey 'dindon' is more than once called a 'dee-don' and the final 't' in words such as 'pont' and 'esprit' is routinely sounded. The French for august 'aout' is not pronounced 'eh-oo'! The list could go on...