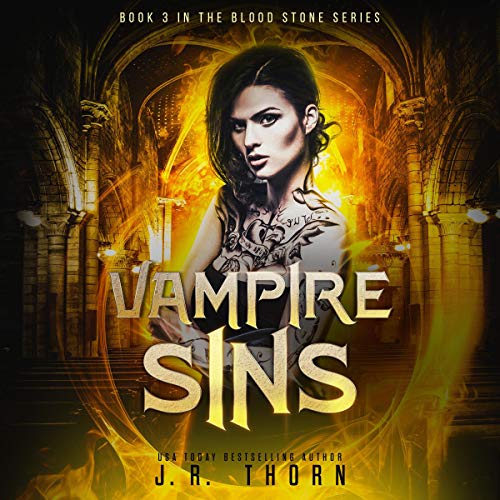 My fourth is a freaking vampire?

Xavier is cocky, overzealous, and way too hot for his own good. He’s just what I need to stop my nightmares from coming to fruition, except he's telling me that I'm not supposed to stop the future from happening. I'm supposed to fulfill a dark prophecy. One where I'm the Queen of Hell, turned into a vampire, and I save hell itself from being destroyed.

Hell getting destroyed sounds like a good idea to me, so I'll have to talk some sense into Xavier, but first I need to get my men all in one place. They're stuck all over the world and, well, let's face it, the world's most certainly gone to shit.

Jet, my dragon shifter, has survived the last loyalists to his brother, but they won't accept his rule unless he obtains the Dragon’s Eye. He better not die trying to retrieve it...or trying to get back to me.

Nate, my beloved human, is trapped Hell knows where and with my grandmother of all people. He’s full of surprises though, and he might just be the weakest link in my bond that’ll save the day.

When all seven sins reunite, I'll have power over hell itself. It's up to me what happens next.

Author's Note: This is a fast-burn reverse harem story. It includes explicit language and sexual situations. Intended for audiences 18 years and older. This is the final story in the Blood Stone Series.

What listeners say about Vampire Sins (A Reverse Harem Romance)

This was a great book. Xavier is one of my favorite characters. I enjoyed the whole series and highly recommend it. The narrator does a wonderful job telling the story. She tells it perfectly. #audiobookobsessionreviewer

I quite enjoyed this series, started a little slow (for me) in book 1 but it ended very well. Really good character building and very good narration. Looking forward to seeing what the author comes up with next.

Really enjoyed this third and final book. Brought all the elements of the first two together. Lia Holland does an awesome job again with narration! #audiobookobsessionreviewer

Ending encompasses it all

I never did feel a great connection to the characters but the author did an amazing job wrapping up all the loose ends. Putting everything together for the listener etc. Impressed with the ending. The narrator did an excellent job performing the book! #AudiobookObsessionReviewer

FINALLY the last book. This was actually quite better that the first two. It had a nice ending, even though the whole deal of saving the world was resolved pretty EASY after all they went through I would have like something more, but well.. Lia Holland continues with a really amazing narration and makes the book much better. 🎧 AudiobookObsession 🎧