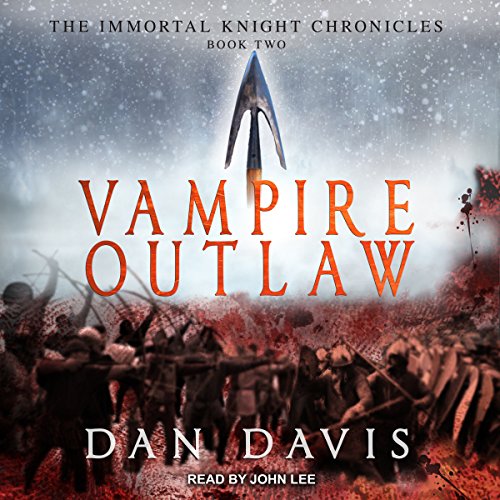 The Immortal Knight, Richard of Ashbury, does battle with the undead outlaws of Sherwood.

AD 1216. A band of outlaws attacks an English manor in the dead of night. The bloody trail leads to the dark heart of Sherwood Forest, and Richard is certain that his old enemy, William de Ferrers, has returned.

But England is in turmoil. The barons have erupted into armed rebellion against King John, and a French army has invaded the south, seeking to crown a French prince as the King of England. Richard must do his duty to save England. But he must also journey deep into Sherwood to destroy William and rescue the Lady Marian before she is devoured or turned.

Book 2 of the Immortal Knight Chronicles takes up 25 years after the end of Vampire Crusader. Featuring thrilling sword fights, skillful archery, epic medieval battles, political intrigue while weaving real history with the origins of the Robin Hood myth, this is exciting, action-packed historical fiction with a twist.

What listeners say about Vampire Outlaw

what an amazing book, thoroughly enjoyed every second! Would recommend to any one. bravo Dan

I await the rest of the series to be on audible. amazing history and fictional story

great book to listen to

obviously the book has been carefully historically researched with some well described characters. Nice play on the Robin Hood legend

the 1st book was ok but did not really inspire me to continue with the rest of the series. As I was waiting for another book to be released I thought I would give the 2nd book a go and am very glad I did. The story for this book is around the legend of Robin Hood inserting the protagonist and his men into the retelling it is very clever and finally gets you fully invested in the characters. The actual story is very clever and keeps you unable to put it down you just have to know what happens next. If you liked the premise of the story in the 1st then you are in for a treat as English legend is interwoven with the Vampire Knight.