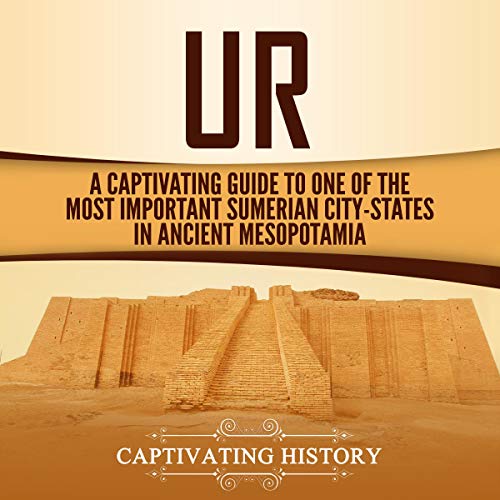 Ur: A Captivating Guide to One of the Most Important Sumerian City-States in Ancient Mesopotamia

Explore the captivating history of Ur

This audiobook is about the city which houses the mighty Ziggurat - the Biblical “Ur of the Chaldees” where Abraham was supposedly born. The site near which the earliest human cultures were found. The site which held the most glorious Sumerian Dynasty in ancient history. This is the story of the city that was destined to die and be reborn every millennium or so, a city full of intrigue, magnificence, tragedy, and glory.

By listening to Ur: A Captivating Guide to One of the Most Important Sumerian City-States in Ancient Mesopotamia, you will...

So listen to this audiobook now if you want to learn about Ur!

What listeners say about Ur: A Captivating Guide to One of the Most Important Sumerian City-States in Ancient Mesopotamia

Ur: A Captivating Guide to One of the Most Important Sumerian City-States in Ancient Mesopotamia is an eye-opening audiobook to learn about UR. I really enjoyed it and would like it to recommend it to all.

Very disappointed with this book. Much too.short and cursery. I could have read wikipedia for the same inf. I will not be purchasing any more of this.series.

The content is valid and the narrator only made bad material worse. Not worth listening to at all

Anything ancient I love, also love reading about the Sumerian's. read these books to understand the bible better.


This book is well written and easy to understand. It even throws light on the location of The Ur.

Very 'absorbing' one would of course have to be interested in that time in history. Very well explained.

The book describes the area where this culture flourished, the foundation of the city, coliform writing, the extensive trade routes, the early king periods, the fall, and the various archaeological works that took place.

I especially enjoyed reading this book and comparing this ancient culture with references in the Bible.

It is a good source to learn about the ancient history of UR. I loved the way this author explained it and highly recommend this book.

This is truthfully ancient history that can be found connecting g to the Bible stories. Stimulating look at Ur and the Sumerians.

Exceptional info about a little known culture getting its right place in the ancient record!

The Euphrates altered course which forced a move for the people. All kind of things happened which counterpart’s cultures through history.

I love the way archaeology ties in with antiquity. It was noted how the area lay undisturbed for periods which made it ready for picking by archaeologists to learn more about this culture.

When I saw Ur I knew it would cover info on Abraham & it did even if at end of book! The author notes some inconsistencies on Biblical characters not stated in the records. Same as for the Egyptians; the timelines don’t match up but rest assured it happened.

You'll get info on the over-all timelines, the several civilizations that vied for this bit of property, and even a touch of the mythology. That said, this is a book on archaeology.

This book is an in-depth, comprehensive examination of the archaeology and history of the city of Ur. It's an outline to the topic, and taken in that light, a very good one.

The book inspects the history of the early city of Ur which may have been the city that the Biblical Abraham is connected with. It's a city that had a long history under a diversity of different regulatory interests, being abandoned around 500 BC.