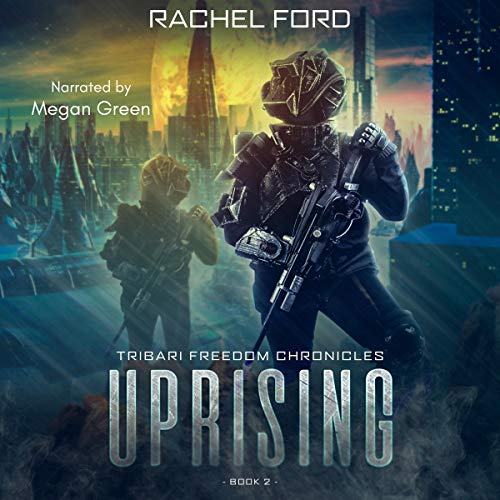 A daughter of Grand Contributors. The wife of a reformer. A woman caught between worlds.

Nikia Idan was raised in the glimmering spheres of society’s elite, but she traded it all for the love of a man who wants to change the Tribari empire. Her new reality is harsher than she ever imagined it could be. When her husband’s push for reform is met with brutal violence, her worlds will collide with a force that will either break her or the system that brought her to the point of breaking.

What listeners say about Uprising

This second story in the series jumps to the home planet and builds the background surrounding the uprising/riot in book one.

It involves a young couple who are married; but come from different economic backgrounds. She works to support them and he is an activist for change. When the government begins a total crackdown they run into trouble and he becomes injured.

After all the issues she becomes convinced that he was right and takes up leadership of the group striving for change.

The book was a little slow to develop the characters and most of them appeared rather stiff and unthinking. This was the weakest part of the story line.

The narrator was adequate but could use a slightly different character voice for the different people as many sound almost the same.

This book was provided free of charge with the expectation of an honest review.

I was given a copy of this book to read and give my unbiased opinion.

I am loving this new world with the struggles they are trying to overcome. You get to know the characters and feel yourself pulled into their troubles. The first book is brought into this one to give another look at what happened. Can’t wait to read the next book!

I enjoyed the depth of background in this audiobook, it was a very unique perspective. Essentially this book sets the scene for future editions in the series. I thought the writing was quite good, and didn’t follow a more traditional script. From my view, the main character grows through tragedy while still maintaining her core ethics.

Narration was fairly good, but it did take me some time to become comfortable with her style.

All in all, I’d like to continue exploring this series, and do recommend that others check it out as well.

I enjoyed the fight in this book, you can relate to the struggle that the main characters are dealing with and the divide that separates them and the other classes.

I just finished reading book 1 and went straight into book two. And I really enjoyed them both. Personally, I think the second one might be slightly better. But I can't wait to start the third. I am so excited. I thought the narration was excellent too. Such great audio-books.... I think they will just keep better.

This book was given to me at my request. I am providing and honest and voluntary review. Thanx!

I was gifted a free audiobook of this and the other books in the Tribari Freedom Chronicles and this is my unsolicited and honest opinion.

I loved the book, the story and the narration. The excellent blurb outlines the plot. The world building is amazing, easy to picture and the characters are so well rounded. The narrator, Megan Green, has a wonderful vocal range and her interpretation of each character is so immersive. Megan Green adds that extra special dimension to the book.

Spoiler alert!
Nikia, a beautiful and privileged daughter of Grand Contributors, falls in love and marries Grell, an idealist clerk, who plans peaceful protestss to reform the oppressive Tribari society. Nikia finds the reality of her new life difficult when cast out by her family, but her love for Grell is undiminished. This idealist young couple, plan a peaceful march to demonstrate against the injustices suffered by the ordinary folk. This is where the events in Catalyst mesh. The consequences of the ensuing riot and its vicious suppression reverberate throughout the Empire, signalling the Uprising.

Another story thread. Children are cherished and yet people are treated as expendable. Grell always says that he would never bring a child into their world. Poor Nikia is conflicted when she discovers her pregnancy. Nikia seeks help of her former family physician.

This series is very political, and is clearly drawing parallels between the Tribari government issues and humanity's issues. But there is also a fair amount of character development, and drama at play, so it is not purely political.

i loved the narration. i thought the accent would bother me at first, but I got used to it very quickly and found that it added to the story.

I was given a free copy of this Audiobook In exchange for an honest review. This book is about Nikia and her husband grel, a man who wants change for the Tribari empire. This second one in the series goes into life on the mining planet which I find very interesting and look forward to reading more about. Definitely recommend.

This series has made me re-think good vs great

I've given 5-star ratings to quite a few books and audiobooks, but this book (and series) made me think I should give more four stars. The world-building, the character building, the way the story builds, and how you can see it's building towards something bigger...it's SOOOO excellent! It's been a long time since I enjoyed a story this thoroughly. I am so drawn in, can't wait to see what happens next and at the same time never want the story to end.

My husband and I both love it. I seriously can't recommend this series more highly!

Great storyline and intriguing descriptions of this world, it’s moons and the culture. It is not for the faint of heart due to the graphic content. I can’t wait to listen/read more of the series.

Book two starts just before the start of the first book. It follows two characters, who were glimpsed in the first story. The story is written well and is compelling, These books are shorter than my usual picks however Rachel manages to create a vivid and detailed world. I would definitely recommend this book. Still not keen on the narrator however.

I really enjoy this series. The story is very interesting, the writer Rachel Ford did a really good job with all the characters. I enjoyed the narrating by Megan Green.

This second book in the series was more enjoyable than the first and I was glad I that I didn't let the irritating narration put me of.
I am looking forward to the next installment.

I really enjoyed this book, it is different from the normal Sci-Fi that i listen to or read in that this was more about society and the oppression of working class citizens rather than just blowing stuff up. I liked the way that the story was split between the characters each working in their own way to make the system fairer. The narration was done to a high standard and each character had distinctive voices.

I went straight from this to the next installment as I wanted to find out what happened as it left you wanting more.


Please note that I was given a copy of this audiobook to provide a non-biased review.