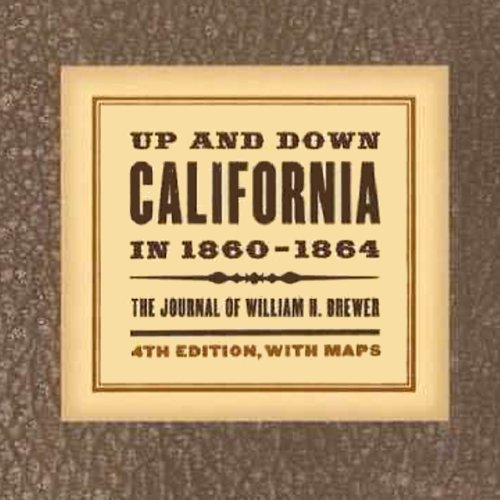 In 1860 William Brewer, a young Yale-educated teacher of the natural sciences and a recent widower, eagerly accepted an offer from Josiah Whitney to assist in the first geological survey of the state of California. Brewer was not a geologist, but his training in agriculture and botany made him an invaluable member of the team. He traveled more than 14,000 miles in the four years he spent in California and spent much of his leisure time writing lively, detailed letters to his brother back East.

These warmly affectionate letters, presented here in their entirety, describe the new state in all its spectacular beauty and paint a vivid picture of California in the mid-19th century. This fourth edition includes a new foreword by William Bright (1500 California Place Names).

What listeners say about Up and Down California in 1860-1864

California backroads of the 1860s

I completely enjoyed this historical journal of an 1860 botanist on a geological (and biological) survey of California.

This is a long and wondrous journal of travels of a geological and biological expedition by foot, horse, and mule up and down central California juxtaposed against the advent of the telegraph, the railroad, and the civil war.

I have lived at the base of Mt. Whitney (Whitney was an intermittent member of the party) and Mt. Diablo (the summit offering one of the best views on earth) and visited most of the places referenced in these journals thus I did not miss the promised (but not provided) maps of the journey. If you are not familiar with California you may want to have Google maps handy. If you are not into maps, you can simply enjoy the stories of unknown California reviled by this journal. If you are a well traveled Californian, you will greatly appreciate this 1860's view of your own backyard.

Although the protagonist was a liberal for that time, there is significant racism and speciesism (he REALLY wants to kill a grisly bear!)

The narration was excellent with subtle but palpable emotionality that heightened my enjoyment of the journal.

A voyage to a Lost California

In 1860, William Henry Brewer joined a team in the very first geological survey of California.

A recent and very young widower, impressionable William wrote letters home, back East, to his brother-- this is his extraordinary diary. Brewer's stories let us look at California in a way that is virtually erased from modern-day eyes.

William's letters are both touching and full of jaw-dropping description, telling of the virgin beauty of the land, the original (and soon to be annihilated) Native culture and relationships he formed, and the beginning of the revolution that would transform California forever.

A primary document like this is priceless and entertaining primary history. It's the kind of story families treasure from generation to generation, saying, “You have to hear about this.” No son or daughter of the West should live without reading this once.

Need to be able to see the maps

All is well with this performance and content. But the front page advertises the fourth edition 'with maps'. Audible needs to provide a link allowing the viewer to see those maps. These are critical to the text.

This is a wonderful historical description of my beloved state of California. This is an interesting accounting of Brewers insightful views about the war going on in the south and of the rugged individuals who inhabited this state in the early days.
I think the narrator did a beautiful job of keeping the right attitude and tone throughout the reading. He makes me appreciate the man who was William Brewer. I think I would have liked him if I'd known him.
This was excellent all the way around!

A must read. Especially for Californians, its not just earthquakes that your government lies to you about. The 200 year Arcflood has occurred every 200 years in California, and it will cover the Central Valley 30 ft deep, 6,000 Square Miles of water. Thats miles, no mistake. This has occurred for 2,000 years and we are within the time frame for another one. Most of the book is about fascinating descriptions of old California life and mining, and nature, but he did witness and write about the last Arcflood in California in 1862. The one that is NOT on the floodplain maps for California. Duh, wonder why? The same reason Daly City did not allow the plaque to be erected commemorating thats wehre the 1906 quake came ashore, right through their pretty new mall. Duh, why didnt they allow that piece of true history???