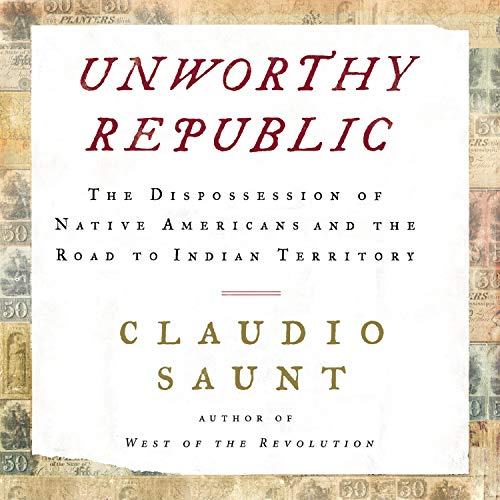 Drawing on firsthand accounts and the voluminous records produced by the federal government, Saunt's deeply researched book argues that Indian Removal, as advocates of the policy called it, was not an inevitable chapter in US expansion across the continent. Rather, it was a fiercely contested political act designed to secure new lands for the expansion of slavery and to consolidate the power of the southern states. Indigenous peoples fought relentlessly against the policy, while many US citizens insisted that it was a betrayal of the nation's values. When Congress passed the act by a razor-thin margin, it authorized one of the first state-sponsored mass deportations in the modern era, marking a turning point for native peoples and for the United States.

What listeners say about Unworthy Republic

This is history done right, a book of extraordinary scholarship, made accessible and riveting by the author’s ability to organize his research and drive home the story. What Claudio Saunt makes clear is the extent to which layers and layers of hypocrisy, self-interest and double dealing led to one of the most shameful episodes in the history of the United States. And none of it was inevitable, as Saunt makes abundantly clear.

Imagine, for example, the extreme posturing required to assert (as Georgia politicians did) that the Cherokees’ presence in the immediate vicinity of white settlers was detrimental to the Cherokees, while at the same time asserting that the black slave population’s presence was enhanced and improved by their proximity to the whites. Indian land, once reclaimed, became plantation land, with vast numbers of slaves supplanting the Cherokees who had been unceremoniously driven out of their ancestral homes.

The role of rhetoric, especially the kind known nowadays as “whataboutism” (appeal to hypocrisy) is also clearly demonstrated, with senators and representatives from the South cynically mocking the politicians and activists of the North (not without justification, but still cynically) for their treatment of Native populations on their own soil. Andrew Jackson’s role in bullying and threatening politicians with retribution unless they voted his way, and the way these politicians valued their jobs above any principles of decency and fairness again reminds me of the compliant and spineless politicians of today, who choose to ignore a multitude of wrongdoings by their leaders and are therefore deeply implicated. When your job becomes more important than your soul, something is wrong. It is both revelatory and infuriating to discover how not much has changed. Cynicism is the enemy, and lack of empathy for the plight of fellow humans, now as then.

In order to know who we are, we have to acknowledge who we were. Willful ignorance of our past is not acceptable. Being truthful about shameful chapters of our past empowers us to be better.

A hard read but a necessary one to understand the history of America.Saunt's detailed synopsis of the Indian removal/extermination acts shows exactly why we should be lamenting our history instead of celebrating.