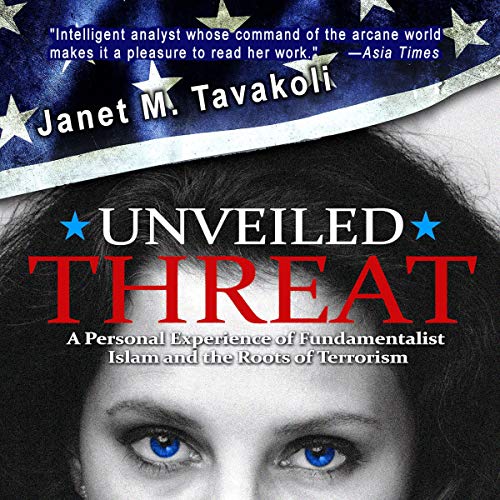 In 1978, Janet Tavakoli moved to Tehran with her Iranian husband and witnessed the overthrow of the progressive Shah and the birth of the fundamentalist Islamic Republic of Iran. After fleeing Iran, she followed the expansion of fundamentalist Islam and the spread of terrorism promoted by religious leaders at the highest echelons in the Middle East.

In 1993, she worked in the World Trade Center complex when terrorists detonated a bomb in the parking garage of the North Tower. On 9/11, she watched the news from London as terrorist plane hijackers destroyed the World Trade Center's Twin Towers in New York on 9/11. She has followed multiple acts of terrorism by multiple fundamentalist Muslim terrorist organizations.

Tavakoli explains why the insistence of fundamentalist Muslims that sharia law is supreme over Western laws, including the United States Constitution, requires a response from those who believe in, and are willing to defend, the values of Western civilization.

What listeners say about Unveiled Threat

An interesting read about Islam

This book is a very interesiting read if you want to know more about Islam and how a large part of the muslim population thinks.

You will learn quite a bit about the Iranian revolution and a bit of other hot topics in the Middle-East.

And the book is short; so there is no excuse for anyone in need of an introduction to the muslim world and way of life

Would you try another book from Janet M. Tavakoli and/or Diane Piron-Gelman?

No. The description of the book says, "heart-rending memoir". I was expecting personal experiences and instead got a recent history lesson.

Would you ever listen to anything by Janet M. Tavakoli again?

No. I found the depth of material to be superficial.

Would you be willing to try another one of Diane Piron-Gelman’s performances?

I bought this book to fill time between credits and thought it would be interesting but I was disappointed.

A narrative warning of the personal experiences of the author and her collection of similar victimization by adherants to an ideology of evil, torture, terror and enslavement, which stands ready and willing to attack all unwitting or uninformed among us, worldwide. A sad testament of global inaction, insensitivity to suffering, and a growing moral depravity.
I thank her for her courage, and effectively righteous clarity.