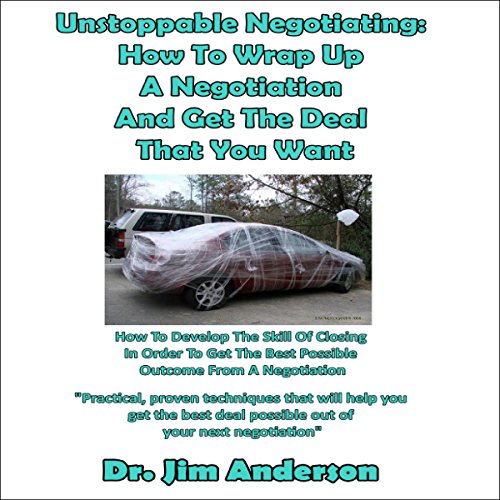 Unstoppable Negotiating: How to Wrap Up a Negotiation and Get the Deal That You Want

All negotiations have to come to a close. When your next negotiation reaches this stage, you want to make sure that you are going to be able to walk away with the best deal possible. In order to make this happen, it's going to be what you've done during the negotiations that will determine what your outcome is.

What you'll find inside:

Some people believe that negotiations have to take a long time and that they can drag on forever. However, it turns out that a skilled negotiator can cause a negotiation to wrap up in record time. There may be times with the other side tells you to "take it or leave it". You need to understand what they are really saying and how to react. During a negotiation, the other side may decide that they need to bring in more senior people in order to get what they want. You'll need to understand how to deal with this in order to ensure that you'll get the deal that you want.

We often believe that it's who we bring to the negotiating table that will determine the deal that we get. However, in some cases it's really who is not there that will control the outcome. Ever negotiation is not the same. The way that you look at a negotiation may not be the same way that the other side is looking at it. One of the best ways to get what you want is to make it what the other side wants by developing a shared vision that both of you can work towards.

In every negotiation, there are many different moving parts. Your job as a negotiator is to keep track of everything that is going on because it's the details that will control the type of deal that you'll get. Remember that just because the other side has agreed to something does not mean that they really want it. They may change their mind later on. Almost every negotiation deals with money in some fashion and this means that negotiators need to understand what money looks like in all of its different forms. We can't always wrap up a negotiation by ourselves. Sometimes we're going to have to bring in a mediator to get the deal that we want.

What listeners say about Unstoppable Negotiating: How to Wrap Up a Negotiation and Get the Deal That You Want