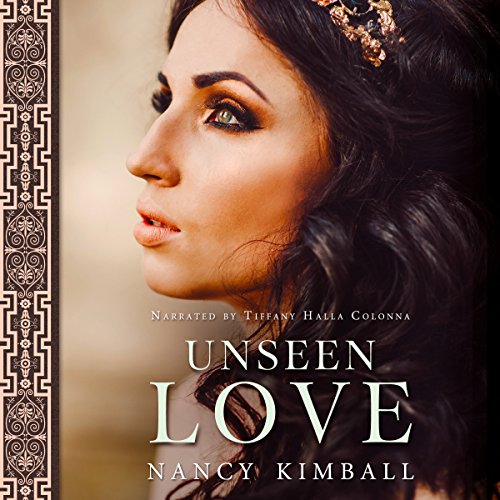 She has an uncertain future. He has a hidden past. Can a forbidden romance set them free?

In the shadows of pagan Rome, Laelia Ricarri's recent blindness destroys her hopes of a betrothal to escape her abusive father. For Drusus, his new mistress is more capable, and beautiful, than she knows. Still tormented by the sins of his past, the only thing he fears more than falling in love with his mistress is failing her in his task. But his newfound faith has made him an enemy of Rome, and the reemergence of an old feud with a calculating rival threatens to ensnare Laelia within its dark grasp. As Drusus reawakens Laelia's inner strength, his patient encouragement is awakening her heart. She's learning to trust, as Drusus must also learn to trust in his God. When the indiscriminate tide of tragedy sweeps through Rome, Drusus and Laelia will have to put their faith in each other to survive. Even if that means being parted forever.

What listeners say about Unseen Love

For me: a surprisingly beautiful story

I love history, but not so much of a romance fan, but this book turned out to be such a beautiful listen I had trouble putting it down. Set in Rome, the main character (Laelia) wants to escape her father's abusive home by marrying, but she has to find a man her father will approve of. Her slave (Drusus) wants to be free, but his duty is to God, who requires him to be faithful to Laelia and her wicked father. When Laelia and Drusus form a friendship that leads to much more, they both feel trapped, knowing their relationship is forbidden by Roman law. This book is realistic, seems to have been well researched as to the societal norms, and thus has a bit of gritty side to it as well as the aspect of Christian persecution. The descriptions of the living areas, streets, and marketplaces give the listener the sense of being there; one can almost feel and smell the scene. Despite the trials and tribulations of the main characters, this is ultimately a story of submission, perseverance, hope, and redemption all done in honoring God in a time and place where that was a challenge.

The narration was excellent in the varying voices, but it did take me a little bit to get used to the cadence of the narrator. I would recommend this book to anyone that enjoys a historical, Christian-based, novel set in Roman times; even more so if one is also looking for the romance genre. A review copy of this audiobook was provided by the author, narrator, or publisher at no cost in return for this unbiased review. My hope is that this review helps in your decision to obtain this book.

What did you love best about Unseen Love?

Laelia and Drusus are such complex characters with an intriguing cast of supporting characters, both villains and protagonists. Also, the descriptions of life in Rome from the fuller's shop (think urine-based dry cleaners) to the bathhouses and Colosseum.

What was one of the most memorable moments of Unseen Love?

When Drusus teaches Laelia to serve and feed herself, and how he makes himself at home cleaning up Laelia's house and repairing the fountain.The ending - no details because, spoilers!

Where Laelia, Drusus, and Naomi go to the market and bathhouse. The details are so rich. Same with the visit to the fuller's.

This book lends itself to audio book. There is something about listening to his book that immerses the reader into Laelia's sightless world.

This story gives a glimpse into the lives of those living in Rome in the first century including the early Christians and the persecution they faced. Religion plays a fairly large part in the story because it was central to life in that time.
The characters are meticulously constructed to create realistic interactions and a thrilling story line.

As long as this book is I listened to it in one session because I couldn't bring myself to stop.

The romance woven into the story is slow to build and emotionally compelling.

The narration was well done with good character voices although emotions were conveyed by making the voice quaver and this was a bit annoying at times. The overall delivery was enjoyable with a smooth natural tone and pace.

I received a free copy of this book from the publisher and/or author and/or narrator in exchange for an honest review.

If you found this review helpful would you please take a moment to click yes below.

This is a wonderful love story. The narration was also very good. I was able to get a good picture of each character by the sound of "their" voice.

this book was amazingly good and learn about God

This book was heartfelt and awesome. It took me to the time and place that this book was in, and it taught me about the Lord. How good God is and it taught me a valuable lesson that God is love and that we should love one another and pray for your enemies and do good to those who persecute us. This is definitely a book that is a must read.

My one quibble with this story is the instant love. It makes sense for Drusus to have a quick attraction to Laelia, but the development of more complex feelings and the depth of understanding that develops between them within hours of meeting felt unrealistic.

That aside, I loved the characters instantly and would have tolerated much more severe storytelling quibbles than the one above in order to hang out with them for the duration of the story.

Laelia's mix of fear and strength felt very real, and I loved that the author allowed her to make mistakes. She desires to be a good, kind person but sometimes allows ambition and fear to cause her to be harsh and arrogant, and aren't we all prone to such lapses in judgement even when our underlying intentions are good? Laelia's journey to faith also felt very believable. The experienced the gospel as demonstrated to her through the actions of others, and those actions prepared her to be receptive in the moment the fullness of the gospel was shared with her.

Drusus was a little more perfect than Laelia, but even he was allowed a few flares of temper and lapses in judgement. Fear prevented him from sharing his faith. Anger caused him to abandon his duties (if only briefly). And the consequences of past mistakes nipped at his heels constantly. But his character was powerful in his determination to remain true to what God required of him, even when it meant making choices that were difficult and painful for himself. And, of course, being a love story, his care for Laelia was also endearing. ;)

This is definitely an adult novel. Ancient Rome was not a culture known for refined morality, and this book shows that. And, while remaining clean, the last few chapters contain some pretty detailed kissing and conversation occurring in the marriage bed.

One of my favorites

I love Christian historical fiction (especially during biblical times) & listen to all I can. Unseen Love is one of my very favorites. It is an excellent story line, the author did a great job of keeping the book captivating and the narrator was excellent as well!

A captivating read with superb narration

This was the first book from Nancy Kimball that I've had the pleasure to read but after finishing I immediately purchased Chasing the Lion. Her writing is flowing and set me right in the middle of the Roman Empire. The narrator did a fantastic job! Her pacing was great and she good job distinguishing different characters.

So glad I went ahead and got it.

I was almost scared off by the comments on the narrator, but got it anyway and was very glad I did. The narrator was pretty bad it’s true but the story was good enough to totally make up for it.

Overall I enjoyed this story. It is a beautiful tale of faith, love and trust in the unknown. I did not particularly care for the narrator, however I recommend this book.