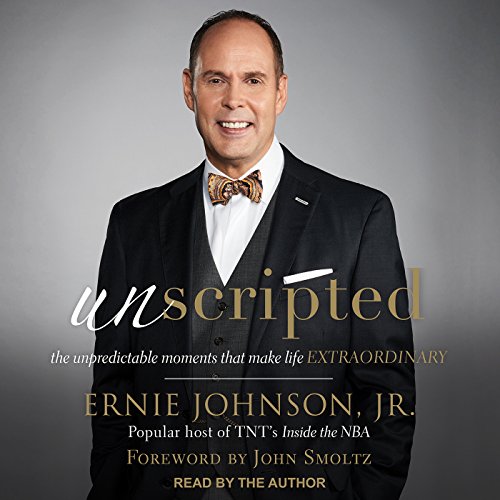 Ernie Johnson, Jr., has been in the game a long time. With one of the most recognized voices in sports broadcasting, he is a tireless perfectionist when it comes to preparing and delivering his commentary. Yet he knows that some of sports' greatest triumphs - and life's greatest rewards - come from those unscripted moments you never anticipated.

In this heartfelt, gripping autobiography, the three-time Sports Emmy Award winner and popular host of TNT's Inside the NBA provides a remarkably candid look at his life both on and off the screen. From his relationship with his sportscaster father to his own rise to the top of sports broadcasting, from battling cancer to raising six children with his wife, Cheryl, including a special needs child adopted from Romania, Ernie has taken the important lessons he learned from his father and passed them on to his own children.

This is the untold story, the one Ernie has lived after the lights are turned off and the cameras stop rolling. Sports fans, cancer survivors, fathers and sons, adoptive parents, those whose lives have been touched by a person with special needs, anyone who loves stories about handling life's surprises with grace - Unscripted is for all of these.

"In Unscripted, you will enjoy some wonderful sports stories, but more than that, you will learn some invaluable life lessons." (Tony Dungy, best-selling author of Quiet Strength)

What listeners say about Unscripted

Always loved Ernie, as nice a guy as you would have imagined. Great story great human, living an amazing life with his amazing family. Really enjoyed this book.

Get to knw the man behind the scenes.

Ernie Johnson deserves an award for this book. You don't want to miss out on the incredible journey of faith, family and fun that he has been blessed to unpack. to the listener. The life lessons that his dad and wife have taught him are a highlight for sure. What a treat! I was particularly impressed and grateful to have been given the opportunity to hear about his family. The joys and the pains amidst the twists and turns that unexpectedly helped him place his faith in God, the Father. It' is truly satisfying to hear that from a man of integrity and humility. You would have never have guessed it by just hearing his voice, or seeing him on TNT's Inside the NBA. After reading/listening to this book, I have come to recognize that he's a gifted author, writer/poet sportscaster, husband, father and friend. This is a book that I really enjoyed listening to. The audible narration is loud and clear. He keeps his emotions in check. Even though there are some truly heartfelt moments where you want to shed a tear. The way he thrills you with those important milestones in his life. And how he inspires you as you read is amazing in its own right. To God be the glory. There's nothing crass, immature or off putting in his book. He simply tells it like it is. Finally, "Unscripted: The Unpredictable Moments That Make Life Extraordinary is a "blackberry moment" that should not be missed. Great job, Ernie!

Although I was familiar with Ernie Johnson as a broadcaster for Turner sports, I really didn't know anything else about him. I saw him do an interview on TV where his book was referenced. am glad I was able to listen to it. It was worth the time.

EJ is a legend.

EJ's story is amazing and he has one of the most amazing perspectives on life. Very inspiring.

Ernie is the BEST! Hearing him narrate his own story made it that much more captivating. Loved it from beginning to end!

Erine is an incredible man with a knack for telling stories. One of the best books I've read. Thank you for the great stories and life lessons Mr. Johnson. You have a fan for life.

Excellent Book by the most Inspirational person!

EJ is an amazing story teller! I dare you to listen to this book without getting emotional. Highly recommended for everyone, not just sports fans.

Could not put it down

Literally listened to a 6 hour book in one day.

Listen and see why! Tears and Laughter

Very encouraged; I have always liked EJ’s work, but now I love EJ the person too.

Extremely inspirational and life-changing. I've always been a fan of Ernie's work but admire him more as a man. I'm leaving now to go look for blackberries.

Recommended with an asterisk

The asterisk of this recommendation is that it might be perceived as a bit preachy the more you go through the book. Religion played a big part of the latter stages of the story and this is fine but some parts may come across a little ‘preachy’.

What a fantastic read, every page is a blackberry moment. Thank you Ernie, I hope they’ll be another book in the future