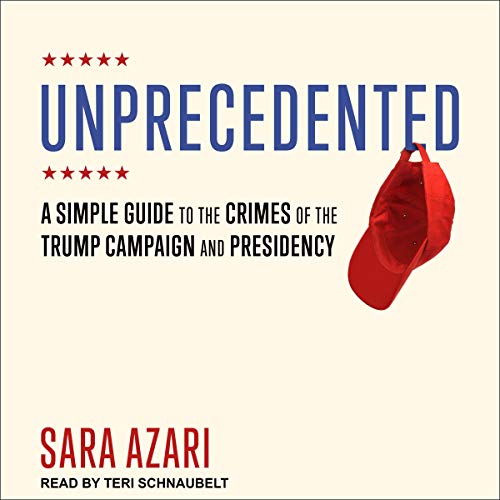 A Simple Guide to the Crimes of the Trump Campaign and Presidency
By: Sara Azari
Narrated by: Teri Schnaubelt
Length: 5 hrs and 32 mins
Categories: Non-fiction, Politics

The Trump administration's attempted and actual violations of the Constitution and the law have surpassed our worst expectations again and again. Add to that the legal morass surrounding members of the Trump campaign staff, and the United States finds itself led by the most corrupt administration in modern American history. The investigation by Special Counsel Robert Mueller on 2016 election interference and obstruction of justice led to multiple indictments that boggle even the brightest legal minds. So how can the rest of us make sense of it all?

Sara Azari breaks down the investigations, evidence, criminal charges, and defenses involving an ever-expanding rogues' gallery of Trump associates and campaign members, as well as the president's own criminal conduct. Her docket also includes a comprehensive summary and expert analysis of the Mueller Report. Azari addresses the consequences of President Trump's conduct and considers whether the president of the United States is ever above the law.