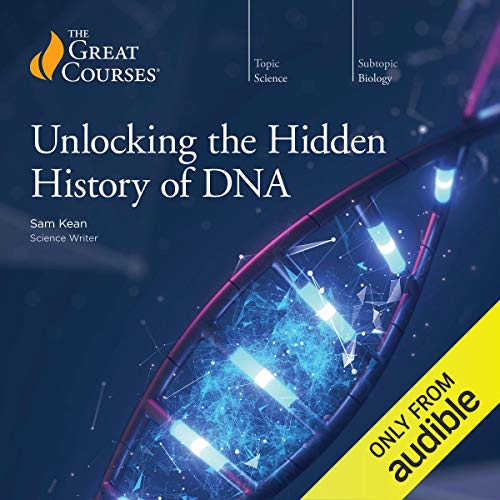 Unlocking the Hidden History of DNA

Unlocking the Hidden History of DNA

Locked inside the DNA of every species that ever lived are endless stories - about origins, ancestors, fate, and much more. Until recently, these secrets were completely inaccessible. But with the help of new technologies, scientists are now reading the hidden history of DNA, making remarkable discoveries about ourselves and our fellow species. Your gateway to this treasure trove of information is Unlocking the Hidden History of DNA, 12 informative and accessible lectures delivered by New York Times best-selling author Sam Kean. Assuming the viewer has no prior background in science, these detailed but delightful half-hour lectures cover the fundamental properties of DNA, the techniques that have unraveled its mysteries, the exciting revelations that have resulted, and the very human stories of the scientists involved - many of whom won Nobel Prizes and sparked fierce controversies along the way.

You start in the mid-19th century with Austrian monk Gregor Mendel, who pioneered the science of genetics with experiments on pea plants, and the almost-forgotten discovery of DNA by Friedrich Miescher. Proceeding briskly through decades when the connection between genes and DNA were pieced together, you learn about the discovery of DNA, the race to determine its structure, and the Human Genome Project, which mapped all three billion base pairs of our DNA. Then you dig deeply into our genome to mine its secrets, including our surprising relationship to Neanderthals, when we first started wearing clothes, genetic influences on language, and our kinship with viruses. You also excavate new historical details about King Tut, Genghis Khan, King Richard III, and Presidents Thomas Jefferson and Warren Harding. Finally, you examine today’s cutting-edge DNA technology, notably a genetic engineering technique called CRISPR heralded as holding the potential for science fiction-like manipulation of our species. Genetics has come a long way since Gregor Mendel’s humble pea plants.

What listeners say about Unlocking the Hidden History of DNA

Sam is a good narrator he kept me engaged throughout all chapters. nice to listen to while during cleaning in quarantine.