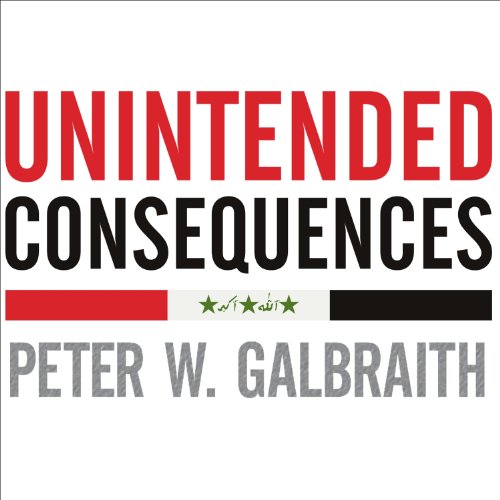 The Iraq war was intended to make the United States more secure, bring democracy to the Middle East, intimidate Iran and Syria, help win the war on terror, consolidate American world leadership, and entrench the Republican Party for decades. Instead, says Galbraith:

Galbraith challenges the assertion that the surge will have led to victory. By creating a Sunni army, the surge, in fact, contributed to Iraq's breakup and set the stage for an intensified civil war between Sunnis and Shiites. If the United States wishes to escape the Iraq quagmire, it must face up to the reality that the country has broken up and cannot be put back together.

What listeners say about Unintended Consequences

The author Peter Galbraith, is the son of the famous economist JK Galbraith, but is a distinguished academic, commentator, politician and former US diplomat in his own right. In this book he gives a critique of America's disastrous policy in Iraq following the invasion of 2003 & the deposition of the Hussein regime. He writes clearly and with great knowledge, concern & perspective. So there is much to be learnt from this book. But it is quite hard going, partly because the events themselves are so dreadful but also because he chooses not to leaven the narrative with much in the way of anecdotes, character sketches or specific incidents of human interest. Nevertheless, the book provides a valuable insight and account of the mistakes & ineptitude of America's policy over this period which has had such terrible consequences for so many people in Iraq and the wider Middle East. Well read by Alan Sklar.

For my own benefit, if not for anyone else’s, here is a brief summary of what seems to have happened. On the very day of the 9/11 Twin Towers attack, Defense Secretary Rumsfeld started talking about plans for invading Iraq, even though the US State Dept. & the US Military understood perfectly well that Al Quaeda was nothing to do with Iraq & Saddam Hussein. By 2003 the US with British support were ready to invade, albeit on the false pretence of the threat of WMD. The Iraqi's had a serious army and fought back but were soon defeated. The stage was now set for some sort of US led reconstruction to take place.

Initially there were sensible plans under Lt. General Jay Garner which crucially would have provided useful employment to the defeated Iraqi army, comprising several hundred thousand soldiers. However Garner was abruptly replaced by the diplomat Paul Bremer as head of the CPA, Coalition Provisional Authority. Given virtual pleni-potentiary powers Bremer overturned Garner’s plans resulting in the dismissal of hundreds of thousands of embittered Iraqi soldiers who had no other means of support, had experience of fighting & access to arms. Furthermore, these soldiers were Sunni Arabs who had been central to Hussein's suppression of the majority Shia Arab population & the non-Arab minority Kurds. The likelihood of chaotic, bloody sectarianism was anticipated with terrible foreboding at the time. And it soon became a reality.