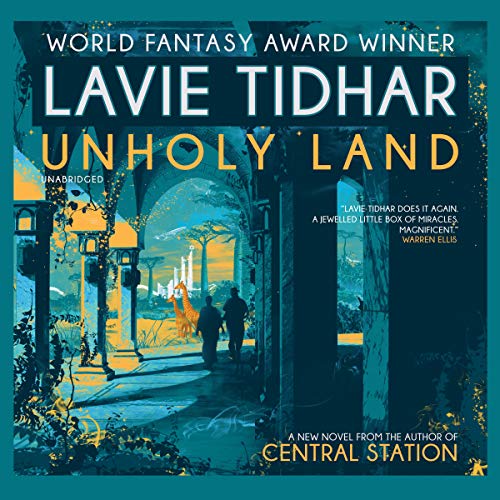 The author of the critically acclaimed, Campbell Award-winning Central Station returns with a subversive new novel evoking The Yiddish Policemen's Union and The City and the City.

When pulp-fiction writer Lior Tirosh returns to his homeland in East Africa, much has changed. Palestina - a Jewish state established in the early 20th century - is constructing a massive border wall to keep out African refugees. Unrest in the capital, Ararat, is at fever pitch.

While searching for his missing niece, Tirosh begins to act as though he is a detective from one of his own novels. He is pursued by ruthless members of the state's security apparatus while unearthing deadly conspiracies and impossible realities. For if it is possible for more than one Palestina to exist, the barriers between the worlds are beginning to break.

What listeners say about Unholy Land

Which reality is real?

Lavie Tidhar's Unholy Land seems a tale built on quicksand. A German writer returns to his homeland, Palestina in east Africa. He is treated as someone under observation by the government. While there, he learns that his niece is missing and assumes the role of one of his fictional detectives to track her down. What ensues is an almost comical series of actions against him that can only be explained by the existence of parallel universes that some can sometimes be consciously traveled between, while other the transitions are unrecognized. Evil intentions are afoot and the writer seems a central figure.

Tidhar's seemingly seamless transitions are reminiscent of Mieville's City and the City as this fictional Israeli homeland, physically distinct from present day creates a sense of disconnectedness. The constantly shifting multiple perspectives contributes to the off balance feel. At the same time, the writer seems to drift into fugue states that makes it hard to discern the reality of the situation versus some ongoing mental breakdown or simply ennui.

The narration is adequate with reasonable character distinction and good pacing.

Beautiful prose. Fun, pulpy plot with strong underlying themes. Just really enjoyable. Though I will say, it feels like the antagonist’s motivations got a bit muddy at the end. Great listen overall though.