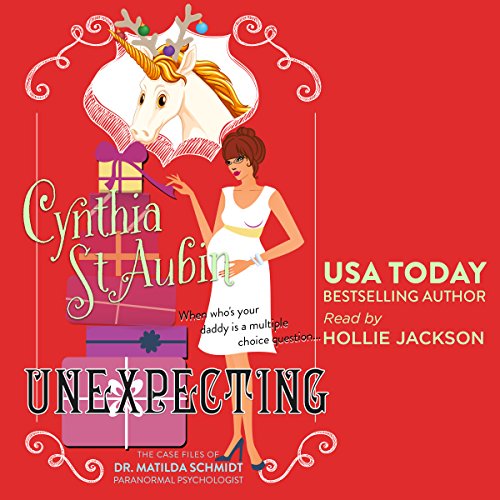 When "who's your daddy?" is a multiple choice question.

Paranormal psychologist Matilda Schmidt is one client away from fa-la-la-la-losing it. Holiday cheer is in the air, gun-toting fruitcakes are in her office, and she's spinning through mood swings fast enough to make her toss her cookies - even without the morning sickness.

When Ol' Kris Kringle goes AWOL after a nervous breakdown, his disgruntled elf is convinced that only Matilda can get him back on his sleigh in time to keep humans from tearing each other apart quicker than couponers at a Black Friday sale.

But their efforts hit the skids when the men in Matilda's life show up and demand to know which of them is responsible for the bun in her oven: the hot hit man who's likely to stuff her stocking with ammunition or the delicious demigod who's made Santa's naughty list a couple centuries running.

This is my first book ever by Cynthia St. Auburn and I loved it. I can't wait to read more. This book will make you laugh until you start to cry. I recommend this book highly.

She did not marry the man I wanted her to marry but the series did end well. I wish the series could continue but Matilda's story is over. This was the most entertaining of all the novels.