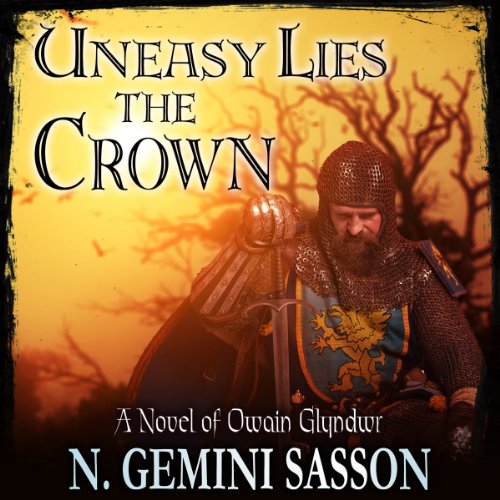 This is the story of Owain Glyndwr, the last Welsh Prince of Wales. In the year 1399, Welsh nobleman Owain Glyndwr is living out a peaceful gentleman's life in the Dee Valley of Wales with his wife Margaret and their eleven children. But when Henry of Bolingbroke usurps the throne of England from his cousin Richard II, that tranquility is forever shattered.

What starts as a feud with a neighboring English lord over a strip of land evolves into something greater - a fight for the very independence of Wales. After a harrowing encounter on the misty slopes of Cadair Idris, the English knight Harry Hotspur offers Owain a pact he cannot resist.

Peace, however, comes with a heavy price. As tragedies mount and temptations loom, Owain questions whether he can fulfill the prophecies and lead his people to freedom without destroying those around him. For centuries, the bards have sung of King Arthur's return, but is this reluctant warrior prince the answer to those prophecies?

This was a very detailed section of history that I hadn't read much about. Very engaging but very sad story. The narrator was excellent.

I had high hopes for this book, it's in an era I love and Glyndwr is such a neat historical figure. It wasn't that this book was bad, so much as not really a novel. It follow the entire life and career for Glyndwr (and many of the other important figures associated with him) in the book by means of single chapter long snippets. Sometimes there's years and half a kingdom distance between the snippets, sometimes they follow more like novel chapters. Anyway, because it jumps around characters and covers so much of the man's life, I found it hard to really get a sense of character. The author tried to put in the character development and emotional conflicts, but it just didn't work for me. The narrator did a good job, but lots of the dialogue was spoken significantly quieter than the narrative bits, making listening kind of difficult.

a rare example of life of the last Prince of Wales. also pretty historically accurate and a fun read all together.

An incredible tale! As a reader of Tudor history, I was fascinated by how the subject of this books life was so closely tied to the lords, ladies and even kings I have so enjoyed reading & learning about. The narrator's voice and accent pulled me back through the centuries; to those times and places. A totally enjoyable read for any lover of history.

Great characters and story line! I hope this author has more books coming to audible soon.

Why did they choose a Scot with a thick accent to read a book about Wales??? He did not manage a convincing Welsh accent for any character. The story was well researched. It deserved better treatment.

Got bored and wanted it to end

I tried but couldn't stay interested for most of the story. It would get better then lose me again with mundane details or storyline. :(

What made the experience of listening to Uneasy Lies the Crown the most enjoyable?

As a proud Welshman living in the Marches close to where a lot of the action took place, I can picture vividly the country described and I am descended from people who must have been directly effected by the events described. A very good story well written and only spoilt by the voice.

A voice that sounded like an Irishman living in South Shields. His pronunciation was at times undecipherable.

Surely there must have been people available who could actually speak both the English and Welsh in a way that was easy on the ear and understandable.

the narration was awful, the narrator slipped in and out of accents for some characters and mispronounced many welsh words which could easily have been researched and spoken correctly it was grating at first and laughable by the end. it spoilt the book.