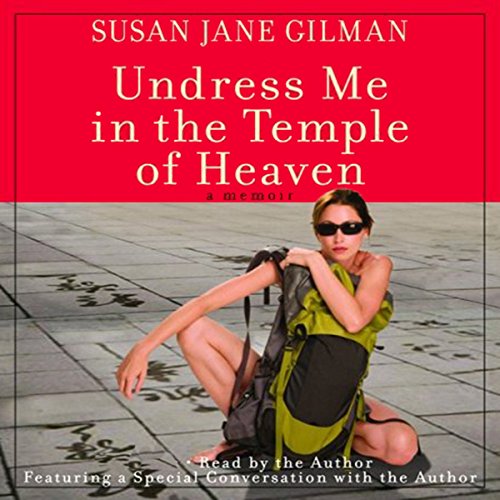 Undress Me in the Temple of Heaven

They were young, brilliant, and bold. They set out to conquer the world. But the world had other plans for them.

In 1986, fresh out of college, Gilman and her friend Claire yearned to do something daring and original that did not involve getting a job. Inspired by a place mat at the International House of Pancakes, they decided to embark on an ambitious trip around the globe, starting in the People's Republic of China. At that point, China had been open to independent travelers for roughly ten minutes.

Armed only with the collected works of Nietzsche, an astrological love guide, and an arsenal of bravado, the two friends plunged into the dusty streets of Shanghai. Unsurprisingly, they quickly found themselves in over their heads. As they ventured off the map deep into Chinese territory, they were stripped of everything familiar and forced to confront their limitations amid culture shock and government surveillance. What began as a journey full of humor, eroticism, and enlightenment grew increasingly sinister-becoming a real-life international thriller that transformed them forever.

Undress Me in the Temple of Heaven is a flat-out page-turner, an astonishing true story of hubris and redemption told with Gilman's trademark compassion, lyricism, and wit.

What listeners say about Undress Me in the Temple of Heaven

I feel like this book started in the wrong place. This book is about two Ivy League women who set out for a 10 month world tour starting in china, the authors best friend losing it after 7 weeks in china and how she takes her friend home never too see her again. Half way through I found myself begging the author to send her friend back home only to find out the whole book is about her friend's insane breakdown overseas. The book then ends with the author going back to china alone and sums up the next twenty years in her final chapter. The author could easily write a more successful, interesting, book about her 10 months of travel and maybe spend three good chapters in the beginning to explain how her adventure had a rocky start with a hysterical friend who almost ruined it all for her.

I did listen to the end of the book with the authors interview and she states that she wanted to write a travel book that was more sad and did not end with the usual happy self-revelation. That was done successfully. I read this whole books waiting for her to have a real adventure that didn't last more than 3 pages at a time. This book is inthralled in the crazy drama that was brought on by her friend and easily overshadowing any positive encounters the author had while in china. The title of this book is very misleading and sadly, I would not recommend it.

On one positive note I would like to say kudos to the author for going back out there and turning her life into an adventure. She has done what most people could only dream of.

For some reason the author chose to narrate this book herself. Big mistake! I was very interested in the story having travelled in communist countries before they were "opened" to the west. However, the narrator's voice and completely inept stab at various accents meant that I had to push through the narration to get to the story. If you are interested in this book buy a paper copy and skip the Audible version.

If only this book had NOT been abridged!

What made the experience of listening to Undress Me in the Temple of Heaven the most enjoyable?

The conciseness, prose and reality. The social commentary and intense descriptive prose of some very real, but difference, characters.

What was one of the most memorable moments of Undress Me in the Temple of Heaven?

I cannot narrow it down to one single moment. There were many.

What about Susan Jane Gilman’s performance did you like?

The easy tone and NOT over-emotionalism which is often the case with americans who read their own works.

Several, but I can say the most moving was when she went BACK on her travels to learn and explore more. Not staying insular in the USA.

I read this book by accident as I normally NEVER read any book that has been abridged. I am only sadder now that it was abridged. How much more enjoyable and pleasing the read would have been if it was read in its entirety.
Abridged books should be banned. My opinion, of course, but I want to read all that the author says and not have some other entity decide what to cut. Bad.

I really would have liked to listen to this story. I really thought it was interesting. But I just couldn't. I usually think that hearing a story in the author's own words is a good thing, but in this case it was detrimental. I had to put the audiobook down about 1/4 of the way through as Gilman's voice was just too grating to my ears. A shame, really.

Thoroughly enjoyed this book. Would have loved to hear the unabridged version though. I thought the author's reading was excellent. She even managed some of the accents.
I would recommend this book to anyone.

A book steeped in blessed reality!

Having spent last summer in China - the memories flooded in like a storm. I love the authentic narrative and gorgeous characters

narration was full of emotion and the story is not just another backpacker's memoir. very intriguing with beautifully descriptive scenes

What I was looking for.

I was looking for a book with adventure and suspense. I wanted to listen to a book that would be a "page turner". I got this and more.

I feel like the author could take similar, quasi-crazy stories from my life and make them sound amazing. While her experience was a true mess, I feel like there weren't too many overall memoir- worthy extremes. I still recommend the book due to its engagement factor, and its relatability to people who traveled as students.

If you could sum up Undress Me in the Temple of Heaven in three words, what would they be?

I'm a fan of nonfiction, travel, and suspense - this narrative has it all! Couldn't

A waste of time

I was truly hoping for a joyful journey instead this book was filled with psychosis and neuroses. Why write this depressing journey?
This is not what I expected. Two beautiful women with lots of angst. Not fun!