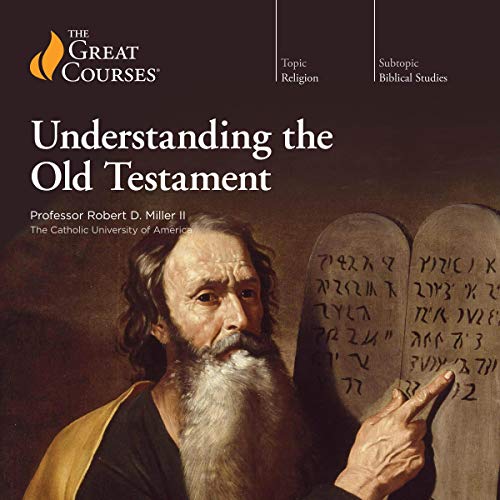 Throughout the lectures, Professor Miller offers a wealth of perspectives on how to approach the texts. You’ll assess the role of translation in the understanding of the texts, studying the meanings of key Hebrew words; you’ll also look in depth at the history, dating, and writing of the texts, and you’ll study their literary and linguistic features, noting how they achieve their impact on the reader.

In Understanding the Old Testament, you’ll take a revelatory look at this epically impactful document, finding its deeper historical and religious meanings, as well as its sublime literary treasures.

Radical (in a good way)

This is an excellent course. Professor Miller strips away centuries of tradition and offers what to my ears is a fresh and persuasive interpretation of the Old Testament. His approach to the text is interdisciplinary, combining history, anthropology, structural analysis, literary criticism and linguistics. His conclusions are often surprising but are always well-supported with evidence. In Lecture 4, for example, his novel reading of Genesis 3 (The snake isn’t a snake! Eve’s not to blame! There’s dark humour and puns! How angry was God?) is presented so forcefully that even if you don’t accept it, you’ll still be impressed by the scholarship. Highly recommended.

Looking at the Old Testament as a literary aspect was not only intriguing, but exciting at times. You can hear the passion in the professor's voice during the lecture. The professor has great insight into the time of writing, characters in history, and religions of the day. The Bible we have today may have literary errors, but in context is infallible, which is evident to one who has studied the Old Testament for themselves and then heard the lectures.

Great recap for an agnostic

This course is full of fascinating little linguistic tidbits lost in translation of the Bible (e.g. who came up with the name Jehovah? Was the snake in Genesis really a dragon? Satan just means “the accuser”?!) I never felt that the lecturer was preaching, which was great. I would have liked a bit more context on how the Old Testament is interpreted by religions today, but with 12 hours of audio I really couldn’t ask for more with one credit.

Should be required of all people who base their lives and those of others on mythical texts thousands of years old.