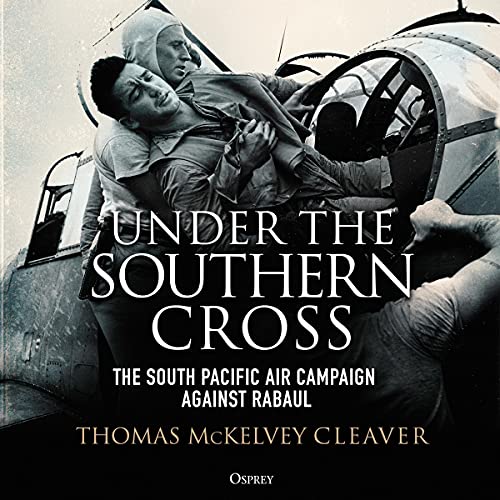 Under the Southern Cross

From August 7th 1942 until February 24th 1944, the US Navy fought the most difficult campaign in its history. Between the landing of the 1st Marine Division on Guadalcanal and the final withdrawal of the Imperial Japanese Navy from its main South Pacific base at Rabaul, the US Navy suffered such high personnel losses that for years it refused to publicly release total casualty figures.

The Solomons campaign saw the US Navy at its lowest point, forced to make use of those ships that had survived the Japanese attack on Pearl Harbor and other units of the pre-war navy that had been hastily transferred to the Pacific. 140 days after the American victory at Midway, USS Enterprise was the only pre-war carrier left in the South Pacific and the US Navy would have been overwhelmed in the face of Japanese naval power had there been a third major fleet action. At the same time, another under-resourced campaign had broken out on the island of New Guinea. The Japanese attempt to reinforce their position there had led to the Battle of the Coral Sea in May, and through to the end of the year, American and Australian armed forces were only just able to prevent a Japanese conquest of New Guinea.

The end of 1942 saw the Japanese stopped in both the Solomons and New Guinea, but it would take another 18 hard-fought months before Japan was forced to retreat from the South Pacific. Under the Southern Cross draws on extensive first-hand accounts and new analysis to examine the Solomons and New Guinea campaigns which laid the groundwork for Allied victory in the Pacific War.

"Cleaver skillfully weaves individual narratives from both Allied and Japanese combatants into the overall story [...] the reader will come away having a greater understanding of the Pacific Theater as a whole, as well as a renewed appreciation for the courage and skill of both Allied and Japanese combatants in that grueling campaign." (Lynn Ritger, aviation historian)

"Thomas Cleaver, whose ‘war stories’ we have come to cherish, has a new one [...] a riveting and powerful saga, one rendered vividly, trenchantly, and with empathy – for both sides in the conflict." (Col. Lawrence Wilkerson, former Chief of Staff to General Colin Powell)

"Under the Southern Cross offers a micro-macro history of the South Pacific campaign of 1942-44, shifting from cockpit and flag bridge perspectives to broad strategy. The Guadalcanal campaign especially remains of interest because so much was at stake and the opponents were so evenly matched for a sanguinary six months. Tom Cleaver does right by the subject in this book." (Barrett Tillman, author of On Wave and Wing: The 100-Year Quest to Perfect the Aircraft Carrier)

What listeners say about Under the Southern Cross

A first class read. Thomas McKelvey Cleaver knows his stuff and puts out a very readable and interesting work. I appreciated the details that were included about the important air battles over a d around Rabaul. He brings to life this little known aspect of WW2 in the Pacific.