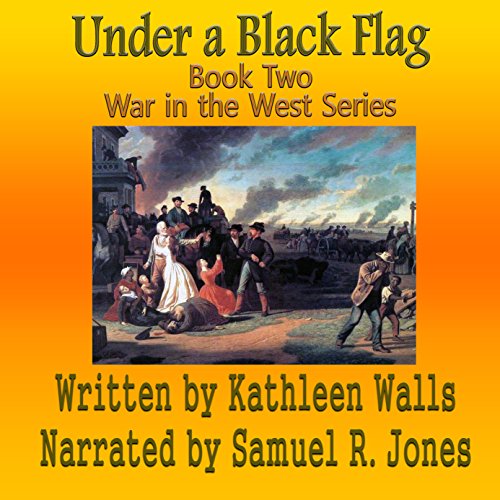 Under a Black Flag

In Kansas and Missouri, the War Between the States started long before Fort Sumter and continued on throughout the war. Some say it is still being fought. My first book in this series, Under a Bloody Flag, deals with that early conflict. Shortly after Kansas was admitted to the Union as a free state, these two states and the nation as a whole were plunging into a declared war. Too much had happened for either side to see a peaceful way to solve sectional differences. For Daniel Fitzgerald, a Southerner who had not found peace in Kansas, the question was could he find it in Missouri or anywhere in these war-torn times. Massachusetts-born Rebecca Styles came to Kansas to insure freedom for slaves. She met and married Daniel after saving him from hanging for being a Southerner. Daniel's half-brother and former slave, André, found a home and family in Kansas, but he still shared a bond of brotherhood and friendship with Daniel. Could that bond withstand the issue of freedom versus slavery that stood between them? As the conflict between North and South erupts, you will meet larger-than-life characters who played a part in the nation's bloodiest war, and you will witness all the drama of the era. You'll meet William Quantrill, Joseph Shelby, James Lane, General Kirby Smith, Frank and Jesse James, Cole Younger, Bloody Bill Anderson, and the other men and women who took part in this tragic era. You will never look at any of them as just characters in a history book again. This is a historical novel unlike any you have ever read before. It is a blend of history, action and romance. Facts read like fiction, and fiction could have been fact. This is a story of a time that changed a nation and a handful of people who lived and died in our nation's most colorful era.

What listeners say about Under a Black Flag