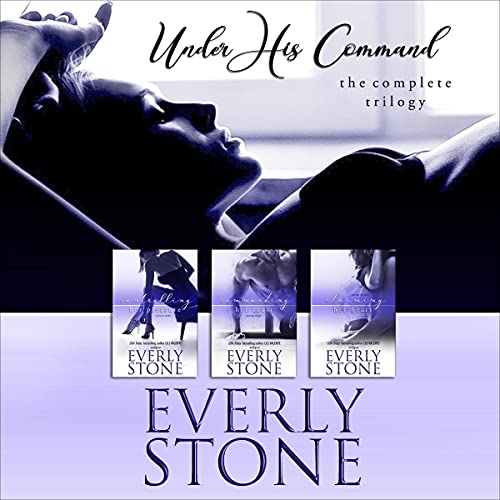 Under His Command Trilogy

Three hot, suspenseful books in one! Binge the complete, best-selling Under His Command series

Warning: Dominant hero Blake Roberts will own your nights and forever ruin you for lesser men.

Blake Roberts has everything he's ever wanted - fame, money, and ownership of the hottest chain of tattoo parlors in the country. But he's haunted by his first love, his former foster sister, Erin. The matching tattoo they share is a constant reminder of who he was before he learned how to control his emotions, his desire, and a woman's pleasure.

He needs to purge her from his heart, and he'll do whatever it takes to be free.

For Erin, what started as a charade has become all too real. She's never experienced anything like the savage bliss she's discovered in Blake's arms. He tests her, dominates her, and if she isn't careful, soon he'll own her - body and soul.

Blake has what he thought he wanted - Erin's submission. But with her submission comes a deeper responsibility. Erin's in trouble, and an innocent life hangs in the balance. Blake knows he can help her break free of the past, but he doesn't know if a man like himself belongs in her future.

How can he swear to protect her from danger when he has a dark side of his own?

What listeners say about Under His Command Trilogy

Such a great series that is sexy, dirty, and makes you want more!
CJ Mission and Jamie Lamchick are amazing as Blake & Erin. Their voices bring these two characters to another level. Warning this series it hot sexy and naughty and will make you dream that Blake came to kidnap you :)

Whew! If you’re looking for a HOT novella, this is the book for you! This has the feel of a second-chance romance. Whether that happens or not remains to be seen. But these two past lovers definitely still have sparks when they’re together, including some dom/sub sparks!

This is very well-developed for being a novella. I feel like I know these characters. There are some flashbacks for history, and it really makes them feel real.

The narrators did a FANTASTIC job. This is HOT, and so is their narration!

Oooh second-chance romance at it’s finest! These two have SO much chemistry and so much history! Will they be able to trust each other and move on for their HEA?

This book is H-O-T, swoony, and full of anticipation. I am so glad I don’t have to wait for the next book to release (as it already has). Off to the next one!

Love this finale to the Under His Command series! Our hero empowers the heroine, and then succumbs to his own broken past.

Helping Erin get her happily ever after is truly a delight. There’s revenge and closure and ….confusion. But an unlikely friend helps set things to rights.

The narrators were absolutely wonderful and I look forward to listening to more books narrated by them.

I was so happy to see all three of these stories as one box set. Each one kind of ends on a cliffhanger so it was nice to be able to go immediately into the next story and find out what happens.
The chemistry between Erin and Blake is off the charts and it really takes until the final book for them to admit that the feelings between them are real.

Blake and Erin are pure fire! The chemistry between them is palpable. There is plenty of banter and tension, as well as romance. This is second chance romance with a bit of friends-to-lovers and enemies-to-lovers. There is even action and intrigue. Did I mention how hot this is? So hot!