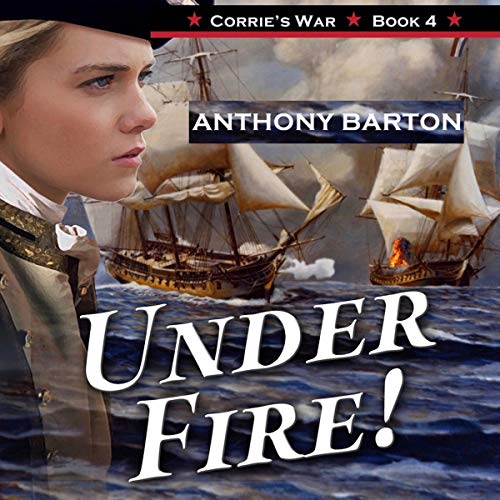 Under Fire!: Duel and Danger!

Professor Anthony Barton was born and raised in a navy family. His mother served in the W.R.N.S. and his father in HMS Tiger. Barton’s stirring tales starring Corrie Harriman demonstrate his respect for the women and men who serve. He thinks it a great disgrace that the women who joined the navy in the time of Nelson have been belittled or ignored by historians and novelists. He says: "Hats off to those brave and untiring women! Their service was as exemplary as it was precarious". In his stirring tales about Corrie, the author seeks to set the record straight.

Corrie is serving in the Royal Navy. She is an officer in the frigate Swift during the war with Napoleon. Because women are not supposed to serve, she has borrowed a spare uniform from her friend and fellow midshipman Tom Potts and has dressed herself as a man, having been encouraged to do so by the ship’s commanding officer, Captain Redburn, who is well aware that she is a woman in disguise.

During her first night watch at sea, Corrie has taken the ship into a heavily fortified bay to burn three enemy coasters, but an unfortunate shift in the direction of the wind has left the ship trapped in the bay. Meanwhile the heavily gunned fort overlooking the bay has been manned by the French.

Corrie has devised a way to outwit the enemy, but can she convince the captain and his crew to follow her plan?

We find her deep in conversation with her friend Anne Keeper, otherwise known to the crew as "The White Lady". Corrie is rather surprised to learn that Anne is part of a world-wide network of woman working diligently behind the scenes to help win the war.

Sail the seas in this action-packed naval adventure of historical proportions.

England and France have declared war, and Corrie Harriman joins in on the action. Corrie’s War is a 16-part naval adventure series where Corrie joins the Royal Navy and must combat deadly enemies, navigate through hazardous storms, and even endure cruelty by the hands of her own crew. No one suspects that Corrie is actually a young woman - and she plans to keep it that way. But no secret lasts long in a crowded warship. Soon everybody knows her secret, including the wicked Master at Arms.

What listeners say about Under Fire!: Duel and Danger!