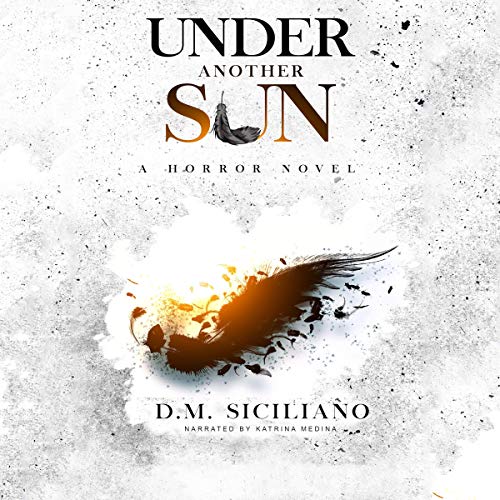 But what do those ominous words mean?

Ray is about to find out, whether he’s ready or not. His "deceased" twin sister, Ravynn, is warning him of impending disaster, but Ray can’t seem to convince himself, or his wife, that he’s not crazy.

But Ray isn’t the only one communicating with his sister. Ravynn’s surviving daughter, Amelia, seems to know things that defy reason, in a time when reason is slowly slipping away.

When Ray’s brother-in-law offers evidence of something terrible coming in the form of prophetic journals Ravynn wrote before her death, Ray can’t doubt the truth any longer. The world is falling down.

The family struggles to hold themselves together as the world they once knew and understood begins to collapse all around them, leading up to a cataclysmic end.

Can Ray save his family in time?

What listeners say about Under Another Sun

Creepy kid steals the show in this apocalyptic story

I think I was expecting... More? We were set up for success: creepy kid, hallucinations, the end of days... But I think we spent way too much time with Ray and Elena arguing over Ray's sanity. The few moments where we really get to see the world ending (with cars gridlocked on a highway and random people breaking into cars, the earth opening up beneath you, the sky on fire in front of your eyes) were just... Too late.

Our big "this is what's happening" was kind of an infodump. And I always find that seeing the monster takes away a lot of what makes it scary; so as soon as we have these answers, I was like "well okay".

The real strength with this story is the emotional support between Ray and Elena. They argue and disagree but they're always coming back to support each other.

Another big MVP is the audiobook narrator, who took the "creepy kid" vibes and ran with it. Between the singing, the casual way that horror-genre kids always know everything, and just the ping-pong vibe of a kid being distracted. It was brilliantly done.

{Thank you Audiobookworm Promotions and author D.M. Siciliano for the complementary copy of the audiobook; all thoughts are my own}

Such and epic adventure

First, I need to say how much this book affected me. I just kept thinking about it. D.M. Siciliano got under my skin. Thinking about the natural disasters and forgetting they weren’t real. Thinking about these characters and wondering how they got so close to me.
Earthquakes, volcanic eruptions, tsunamis, snow in the summer, birds falling from the sky...this world is coming to an end and a few seem to know exactly when it will happen.
Some families are closer than others, from across generations and beyond. Twins Ravynn and Ray have always had a special connection but after Ravynn disappears and is presumed dead their connection continues. Through dreams Ray talks to his sister and is making predictions about disasters. Is Ray just losing his mind? He can’t be communicating with his missing sister in his head, but the predictions are coming true.
So much is going on in this book that I just don’t want to talk about and give spoilers. I needed everyone to succeed and survive. Tension builds as catastrophe after catastrophe comes true, spiraling toward the end of this world.

The narrator was remarkable in her reading of the text ,as always. However, the story was long ,very drawn out And unfortunately very predictable. This is the 1st unsatisfactory review then I am unfortunately force to give about a book. I am truly sorry to state that Ive been struggling to finish this book for almost 3 weeks, before giving up. I was looking for a good scarey horror story, and this story clearly was not what I expected. Although I believe in be a good steward of the Earth, I serious doubts about the science behind climate change therefore this book this do not scare me. Read at your own peril.