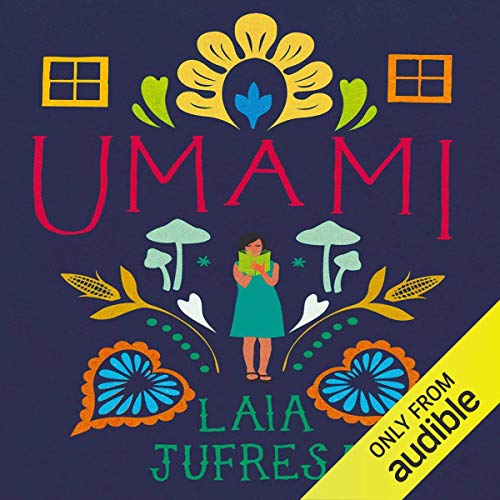 It started with a drowning.

Deep in the heart of Mexico City, where five houses cluster around a sun-drenched courtyard, lives Ana, a precocious 12-year-old still coming to terms with the mysterious death of her little sister years earlier. Over the rainy, smoggy summer, she decides to plant a vegetable garden in the courtyard, and as she digs the ground and plants her seeds, her neighbors in turn delve into their pasts.

As the ripple effects of grief, childlessness, illness and displacement saturate their stories, secrets seep out, and questions emerge: who was my wife? Why did my mom leave? Can I turn back the clock? And how could a girl who knew how to swim drown?

Using five voices to tell the singular story of life in an inner-city mews, Umami is a quietly devastating novel of missed encounters, missed opportunities, missed people and those who are left behind. Compassionate, surprising, funny and inventive, it deftly unpicks their stories to offer a darkly comic portrait of contemporary Mexico, as whimsical as it is heart-wrenching.

Laia Jufresa was born in Mexico City, grew up in the cloud forest of Veracruz and spent her adolescence in Paris. In 2001 she returned to Mexico City and discovered she didn't know how to cross a street. She's been writing fiction ever since. Laia's work has been featured in several anthologies and magazines, such as Letras Libres, Pen Atlas, Words Without Borders and McSweeney's, and she was named one of the most outstanding young writers in Mexico as part of the project Mexico20. In 2015 she was invited by the British Council to be the first ever International Writer in Residence at the Hay Festival of Literature. She currently lives in Cologne, Germany.

Amazing performance of an awesome story

Umami is the beautifully intimate story of the folks who live in Belldrop Mews in Mexico City (somewhere I would love to visit one day). The mews are set around a central courtyard and the five buildings are named after the five tastes on a tongue: Salty, Sweet, Sour, Bitter, and Umami. The story is told over a few years and from the view points of few of the mews residents: Ana, Marina, Pina, Alfonso, and Luz. It is a story of loss, but also of life and love.
***
Ana has lost her sister, Pina has lost her mother, Marina has lost her appetite, Alfonso has lost his wife, and Luz will lose her life (these are not spoilers btw). Their stories are so full of humour, colour, flavour, and heartbreak. As I finished reading I cried because this has been such a pleasure to read and to be immersed in these unforgettable lives.
***
This book, more than many I have had the pleasure to read, played with language in such an amazing way. One of my favourite word plays which happens throughout the story is from Marina, an artist who invents new colours. Here is just one small section: "Hospitachio is the pistachio green color of hospitals. Burgunlip is the color of your mouth after a few glasses of red wine. Insomnlack is for the dark rings under sleepless eyes. Rainboil is that complex blend of petrol colors you see on the tarmac at filling stations." I can see them all! Incredibly imaginative writing from Laia Jufresa and equally impressive translation from Sophie Hughes. I really had a feeling that absolutely nothing got lost in translation. I also think I may have listened to one of my favourite reads of the year! Karina Fernandez was so hypnotizing to listen to.

I loved listening to the reader's voice - i wished the story was stronger.

The imagery was beautiful but i could not follow it easily and had a lot of trouble tying the story together.

I held in until the end because i loved listening to it - the imagery - and the potentially beautiful tale - that sadly, for me - never revealed itself.

I am hopeful others will get more out of it than i did.