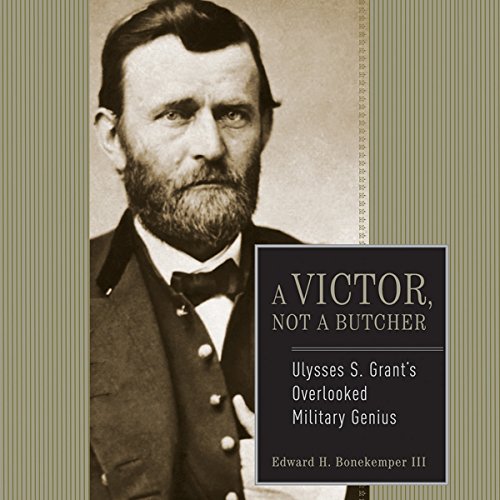 Ulysses S. Grant: A Victor, Not a Butcher

Ulysses S. Grant is often accused of being a cold-hearted butcher of his troops. In Ulysses S. Grant: A Victor, Not a Butcher, historian Edward H. Bonekemper III proves that Grant's casualty rates actually compared favorably with those of other Civil War generals. His perseverance, decisiveness, moral courage, and political acumen place him among the greatest generals of the Civil War - indeed, of all military history. Bonekemper proves that it was no historical accident that Grant accepted the surrender of three entire Confederate armies and won the Civil War. Bonekemper ably silences Grant's critics and restores Grant to the heroic reputation he so richly deserves.

What listeners say about Ulysses S. Grant: A Victor, Not a Butcher

I am not a Civil War buff and didn't know much about Grant, except that he had accepted Lee's surrender at Appomatox. This was a very interesting summary of Grant's Civil War career, showing how he aggressively pursued victory. For any other listeners, I would suggest getting some maps showing the Vicksburg and Virginia campaigns, because I would have liked to look at a map during some of the narration describing the movement of the armies.

Puts long overdue perspective on a brilliant historical character. The statics were necessary but a bit distracting from the narrative.

This is a good overall repudiation of the butcher myth for the layman. Fed and nourished by the Southern apologists for the inept General Lee, the butcher blanket was thrown over Grant by Northern Copperheads in an attempt to defeat Lincoln at the polls in 1864. Great book. 5 stars except for the - POOR narration.
Antietam is pronounced Auntie- eat'em. Seriously. Almost made me wreck the car the first time he mispronounced it, it was so ear shattering. I had to stop and think of what he was saying and it was in the correct context. There are other examples but this is the most jarring. O, and Mono-casey for Monocacy. Okay, I'm from Maryland, but jeesh. And Bullavar for Bolivar? Who edits this stuff?

All the myths of General Grant are debunked in this great book about the Civil war. Two of the best military men of all time were Grant and Sherman. Many of the North's Generals were far less than adequate.

I can't recommend this book because the narration is so distracting. Antietam is read as "antie edam" and Monocacy is read as "mono casey"

Who would you have cast as narrator instead of E. Roy Worley?

The reader read very quickly and when I slowed the speed it was hard to understand.
The information was intense going from battle to battle but always stating the case that the author believed. That being, The premise that Grant was less bloody than Robert E. Lee. I thought this was well stated and the author's arguments were well founded and proved.

What did you love best about Ulysses S. Grant: A Victor, Not a Butcher?

Well spoken. Clear and concise story that followed the timline of Grant's battles.

Grant. There was a lot of insight into others, but the book was about Grant.

Others have noted the narrator's odd pronunciations of place names, but what galled me was that he put a southern accent on Pemberton's words. It is unfair, but the narrator's ignorance reflects on the author and undermines his very good analysis of Grant and his rightful place in U.S. Civil War history.