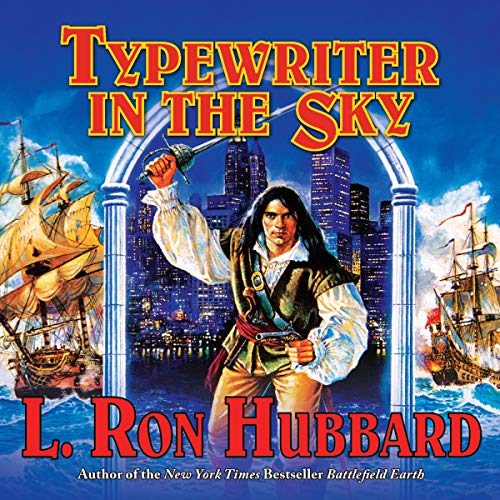 Typewriter in the Sky

It’s not easy living in someone else’s world. But that’s the story of Mike de Wolf’s life...literally.

The whole thing started at his friend Horace’s Greenwich Village apartment. Horace is a writer and he’s decided to model one of his villains after Mike. Sounds crazy...until Mike reaches to turn on a light and gets the shock of his life.

Knocked unconscious, Mike wakes up to find himself tossing in a violent ocean surf and getting slammed against the rocks. That wouldn’t be so bad if it weren’t for the bullets flying over his head, followed by the swordfight, certain to end in death...if not for the wild, beautiful woman on horseback who comes to his rescue.

This isn’t the West Village anymore. Apparently it’s the West Indies, some 300 years ago, and Mike de Wolf is now Miguel Saint Raoul de Lobo, pursued across the Spanish Main by pirates, Englishman, and worse.

He doesn’t know how he got here or why, but he does know he has to get out fast. Two problems: first off, the bad guys in Horace’s stories never get out alive, and second, Mike’s not all that sure he wants to leave after all. Seems he’s fallen for that wild woman on horseback....

The answer’s written in the sky - in a wildly original, wickedly amusing novel in which, if you’re not careful, you might just find yourself getting lost.

“An adventure story written in the great style adventures should be written in.” (Clive Cussler)

What listeners say about Typewriter in the Sky

It started like a fun story... just a fun story. And then, well, I didn’t expect the plot to go that direction and it was AMAZING.
The performance was great, too.
Starting the next audio book by L. Ron Hubbard in a moment. :)

Loved it, it was one of the first books I really enjoyed as a kid. That's when I realized that I love to read.

Could have been stunning

Narrator was brilliant except for when it came to the heroine. He could have been more consistent with accents, too. The story? Well, Hubbard was racist and sexist and that is apparent, and I knew that going in. Still was a bit jarring at times.