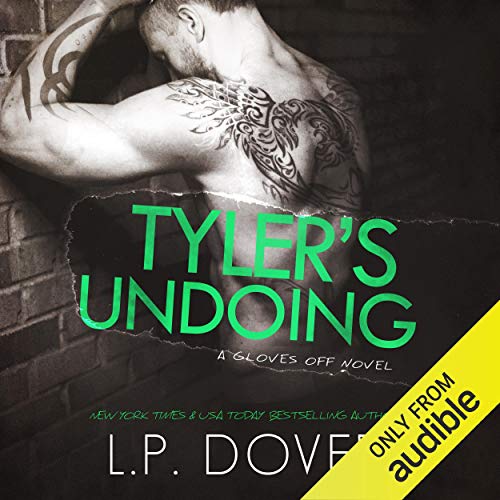 Get ready to be knocked out MMA style in this steamy, romantic suspense by NYT and USA Today best-selling author L.P. Dover. This novel will conclude Tyler's story, No Cliffhanger. Just hot and sexy fighters who want to take you down to the mat.

Through mutual understanding, Tyler's secret affair with Gabriella Reynolds has come to an end. It's a decision that not only saves their friendship, but it's one that will change his life forever.

For the past couple of years, Tyler Rushing has been known as one of the UFC's most memorable and sexy heavyweight fighters. Now he has the chance to win the title and claim the fame he so deserves. He has everything he could ever want until Kacey Andrews walks through the door of his gym, wanting nothing to do with him. Keeping his eyes off of her is a challenge; there's an innocence about her that draws him to her, and he's not going to stop until he makes her his. Little does he know that Kacey Andrews isn't a stranger. She's a part of his world; he just doesn't know it. It's a secret she's worked hard to keep hidden.

Kacey spent years trying to get away from the fighting world, away from the man who's hated among the MMA elite... her brother, Kyle Andrews. Unfortunately, she's brought back into it when Tyler's relentless battle for her heart wins her over, drawing her in. The only problem is that secrets never stay buried forever. In the end, Tyler has a decision to make, and it's one that can possibly destroy his and Kacey's life... forever.

What listeners say about Tyler's Undoing

The story was addicting! ! If you love a good romance with drama this is your book!

I love this series and can't seem to get enough. I have already read a few of them twice now

What did you love best about Tyler's Undoing?

deathly something I wasn't expecting,,, tired it was definitely a character that surprised me

I never saw anything coming ...very glad of the outcome

Which character – as performed by Lauren Sweet – was your favorite?

Yes it was. never listen to this offer before. But I can't wait for about two

Decent read to pass the time

This was a decent story to pass the time.

It had some good and some bad... I found it to be drawn out in places and other plot opportunities lost! What could have been an epic scene was just blah, while needless details were wasted on scenes that could have been left out all together.

Overall it did the job of occupying my mind for a few hours, so that alone is worth something.

I'd recommend it to anyone interested in MMA romances.

Book was fine, narrator was not

I listened to about 2 hours of this book before I gave up and bought the Kindle version to finish. This book is done in dual perspective but only a female narrator. Her women's voices were high pitched and nasally and her men didn't sound like men at all. I could have possibly gotten past those things, however, the thing that put it over the top for me was the fact that she kept putting emphasis in weird places like she was trying to make everything everyone said sound provocative and flirty. It got to be just way too much for me and I was much happier finishing the book in my own voice.

The story was pretty good despite the choice of narrator and I recommend it. There were a few places where I wanted to slap Kaycee for not telling the truth but I also saw her reasons for not doing so. So that part wasn't too distracting or over the top. I thought she and Tyler were good together and despite her not being completely honest he did get over it and everything worked well for a sweet HEA.

I did go ahead and buy the rest of the series on Kindle as well, since they don't appear to be here on Audible and if they keep the same narrator I wouldn't want to listen to them anyway.

I really enjoyed this book. One of the reasons is that there are none of the standard clichés that I usually read or hear with books. Lately, I have been rolling my eyes in the back of my head due to those clichés, such as when they first meet an attractive man, "my body ached for him." Geez, you just met the man. The story was really refreshing. I think I would have liked to have a different narrator that could do more voices or men's voices better or even have a female and male narrators, but overall she wasn't too bad.

I read a previous review regarding the person reading it being female and how it didn't really work. I totally agree. it made it hard to figure out who was talking at times. and really took away the romance of it. the story was fun though. pretty simple. I'm not sure if I would choose this book just due to the narration.

I love all L.P Dover's Series. But this is not the 1st book in this series. It's like the 2nd or 3rd. I wish they would release the rest darn it. Love this book!

What did you love best about Tyler's Undoing?

I do like a HEA, and while the theme has been done before, LP Dover did add some new additions to the plot.

Would you be willing to try another one of Lauren Sweet’s performances?

I actually skipped through some of the drama, so not necessarilyl

I would have liked the narration to be done by a male for Tyler's part, since it was 1st person. It was a little distracting. I also thought Brie's voice was grating. That said, given the amount of voices the narrator did, I think she did as well as she could. I am a MMA fan as much as I am a romantic, and I don't think some of the MMA scenes were very realistic, All said, I will give LP Dover another shot.

the actual story was very average. not terrible not particularly good but ok enough to finish. the narrator did it no justice at all. i think i might have enjoyed it a bit more if id read the physical book rather than audio :-/