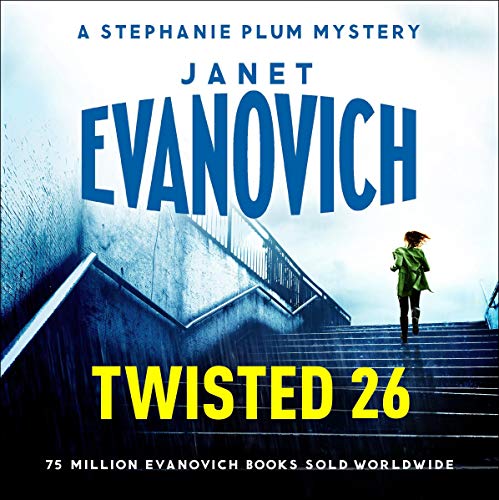 How far will Stephanie Plum go to protect the one person who means the most to her? The stakes have never been higher in this unstoppable thriller from Janet Evanovich.

This isn't just another case. This is family.

Grandma Mazur has decided to get married again - this time to a local gangster named Jimmy Rosolli. If Stephanie has her doubts about this marriage, she doesn't have to worry for long, because the groom drops dead of a heart attack 45 minutes after saying, 'I do.'

A sad day for Grandma Mazur turns into something far more dangerous when Jimmy's former 'business partners' are convinced that his new widow is keeping the keys to a financial windfall all to herself. But the one thing these wise guys didn't count on was the widow's bounty hunter granddaughter, who'll do anything to save her.

To Fortune and Glory!

I have to admit that the last two books were disappointing, and I didn’t have high expectations for Twisted 26. However, I really enjoyed this story, and the more prominent role that Grandma Mazur - one of my favourite characters - played in the book.

Was pleasantly surprised to see a little bit of character development in regards to Stephanie, but I just wish the endless procrastinating between Ranger and Morelli would be resolved.

Still, sets up a potentially great plot for Book 27.

Always a fun ride, the chaos and humour always puts me in a great mood

Another fantastic read in the mis-adventures of Stephanie Plum & friends. If you’ve never read the series before, don’t worry, now you’ll go and get the preceding 25, if like me you’ve been waiting with baited breath, you won’t be disappointed! Romance, action, mystery, comedy & a great story line! After all these years the characters are my family 😊

I thought that this was better than the last couple of books. Totally loved it.

Jimmy Rizzoli marries Stephanie’s Grandma, 45 minutes later his dead. Here starts the story of the missing keys. This is all I will say regarding the action and mystery in this one, just know that Grandma is a big part of it.

Stephanie is back, and her grandma too!

Stephanie is very worried about her grandma since she is being targeted by the local mafia and by the family of her late husband. At the same time she is depressed about her work and the lack of commitment in her life, which is an interesting twist. Lula is always awesome and I enjoyed this story very much.