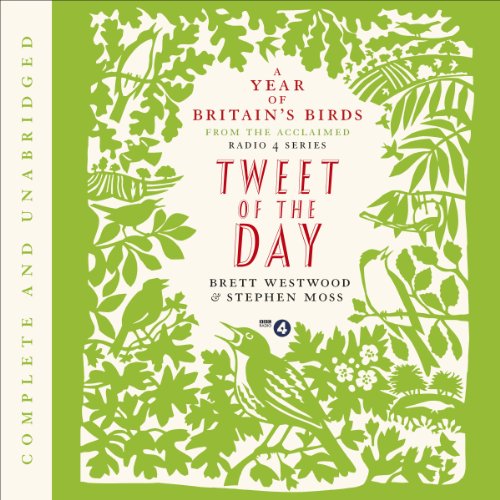 Imagine a jazz musician, improvising on a theme. Then imagine that he is able to play half a dozen instruments - not one after another, but almost simultaneously, switching effortlessly between instruments and musical styles with hardly a pause for breath. If you can countenance that, you are halfway towards appreciating the extraordinary song of the nightingale....

Wherever we are, there are birds. And wherever there are birds, there is birdsong. It's always a pleasure (and a relief) to hear sounds that prove the world's still spinning: whether it's the sighing of migrating redwings on a damp October night, the twitter of swallows fresh in from South Africa in April, or the call of the cuckoo in May.

Based on the scripts of BBC Radio 4's beloved year-long series, and distilling two lifetimes' knowledge, insight, and enthusiasm into this recording, Brett Westwood and Stephen Moss take you month by month through the year, and the changing lives of our favourite birds.

From peregrines swapping sea-cliffs for skyscrapers to swifts spending almost their entire lives on the wing; from charms of goldfinches to murmurations of starlings; from ptarmigans thriving in the Highland snow to the bright-green parakeets thronging London's parks; this audiobook is packed full of extraordinary insights and memorable facts. Tweet of the Day is a book for everyone who loves Britain's birds, and this audiobook contains over 150 birdsong recordings to bring them to life.

Produced by arrangement with the BBC. Birdsong recordings copyright Geoff Sample and Wildsong.

This is the audio version of the expanded book of Tweet of the Day read by the authors, not the radio series itself. This audio book contains 193 birdsong recordings.

"Tweet of the Day: great idea, great title. Why didn't I think of it?" (Bill Oddie)
"This lovely book is a perfect introduction to British birdsong, informative and hugely enjoyable, so stop tweeting and learn how to listen to the experts." (Chris Packham)
"Brett Westwood and Stephen Moss read from their delightfully varied and quirky scripts...A wonderful companion on a long drive or walk, this is an eye and ear-opening book." (Christina Hardyment, The Times)

The original radio programmes are great and (as at the time of this review) can all still be downloaded through iTunes free of charge. The physical book "Tweet of the Day" is fine as an add-on, and the six 5-star reviews which appear here on Audible all (rather bizarrely) relate to that, NOT to the audiobook, which has not previously been reviewed. The audiobook is a bit of a disappointment. Unsurprisingly, the authors don't deliver their own writing as well as their celebrity guests did in the original programmes; and more importantly, the amount of birdsong played in the audiobook is very restricted, generally just a couple of seconds at the start of each bird's section, rather than played as a background throughout. The whole feel of being out in the field - key to the original programmes' appeal - is lost. Altogether, it's a bit of a mystery to me why the audiobook has been produced at all.

Listen to the originals

This was a bit of a let down. The original recordings bring the birds to life with the sounds of the places and species. Also having the narators from the radio from David Attenborough to Bill Odie made the original tweets interesting and varied. THIS IS NOT THE ORIGINAL RECORDINGS. The writers are reading it - whilst excellent and informative the all run together as all read out by just two people. Becomes dull and lacks the life of the BBC recordings - make sure you get the right version of TWEET OF THE DAY

great way to learn your birds in 5 min snatches

engaging. informative, fun and good sound clips. great for the car or commute. enjoyed it.

I love this audiobook: it takes me out of the inner city and back to the garden and woods of my childhood.

Bird songs and much more

I have enjoyed this book very much. I listen to it frequently trying to learn some of the bird songs. The information is fascinating and clear I have learnt so much. It is beautifully read and very easy to listen to. The first few chapters are a bit long especially when you are keen to hear the birds but very interesting