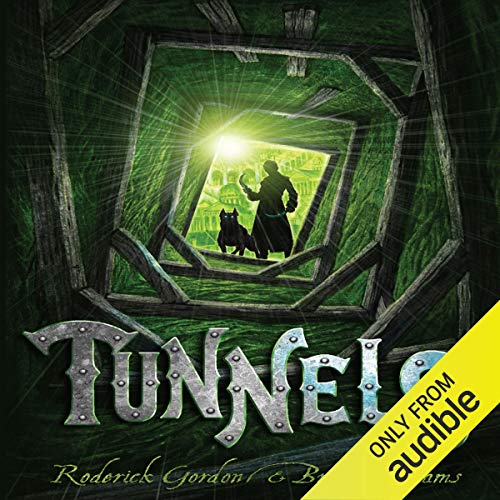 Here is a thrilling adventure story about a mysterious underground world, read by Jack Davenport.

Fourteen-year-old Will Burrows lives with his parents and younger sister Rebecca in London. He has little in common with any of them, except for a passion for digging, which he shares with his father, a museum curator and doctor of archaeology. When his father suddenly disappears after a row with his mother, the police believe he has just gone away for a while to cool down. But Will is unconvinced, and decides to investigate with his best friend, Chester.

What listeners say about Tunnels

This audiobook does not match the book at all. Skips alot of areas. Cannot keep up. Terrible

get the unabridged version!

Main recommendation: get the unabridged version. The abridged version is so chiseled--it feels like you go right from "set up" to plot summary, and then it's over.

I can't tell you how great this book is! My grade six learning centre boys loved it! They actually ran to class and begged to listen/read it. The discussion was incredible. The language including metaphores, personal experiences the characters had that my students could relate to and the historical content was so well connected! We want more!

I bought this thinking it was an audiobook on sale. I didn't realize it was only the first two chapters. Why did I have to pay for a sample? This felt like a trick.

This book was well read.l and had nice plot twists. The narrator did a great job.

Tunnels Abridged version.Unabridged is worthy too

Tunnels is an exemplary exploration of what it is like to be a non military personnel in a Jeremiah 51 Michael Biehn Creighton experience.
What can go on if You find a way and dare to enter the holes of this earth.What might happen to you if you have no right to enter

This story is meant to be a great one, the narrator was very good though.
However I was sadly disappointed at how much content was missing from this Audio book! I have the actual paper back books and there were some major story points missed out in this version.
Deeper (second book in the series) seems to be better, but refers back to content from the first book which wasn't actually told in the audio book. I'd suggest not buying this but rather buying the actual book instead! some major parts have been missed, for examle Will meeting Cal's cat OR when he and Cal go out with Uncle Tam to meet his friends among other parts, but I don't want to give any spoilers.