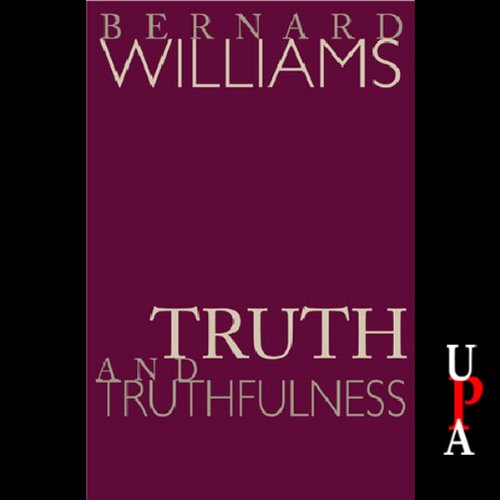 What does it mean to be truthful? What role does truth play in our lives? What do we lose if we reject truthfulness? No philosopher is better suited to answer these questions than Bernard Williams. Writing with his characteristic combinationof passion and elegant simplicity, he explores the value of truth and finds it to be both less and more than we might imagine.

Modern culture exhibits two attitudes toward truth: suspicion of being deceived (no one wants to be fooled) and skepticism that objective truth exists at all (no one wants to be naive). This tension between a demand for truthfulness and the doubt that there is any truth to be found is not an abstract paradox. It has political consequences and signals a danger that our intellectual activities, particularly in the humanities, may tear themselves to pieces.

Williams's approach, in the tradition of Nietzsche's genealogy, blends philosophy, history, and a fictional account of how the human concern with truth might have arisen. Without denying that we should worry about the contingency of much that we take for granted, he defends truth as an intellectual objective and a cultural value. He identifies two basic virtues of truth, Accuracy and Sincerity, the first of which aims at finding out the truth and the second at telling it. He describes different psychological and social forms that these virtues have taken and asks what ideas can make best sense of them today.

Truth and Truthfulness presents a powerful challenge to the fashionable belief that truth has no value, but equally to the traditional faith that its value guarantees itself. Bernard Williams shows us that when we lose a sense of the value of truth, we lose a lot, both politically and personally, and may well lose everything. The book is published by Princeton University Press.

"[ Truth and Truthfulness] shows all Williams's characteristic virtues.... And what a wonderful life it would be if even a small proportion of philosophers could write so well." ( Times Literary Supplement)
"Its virtuoso blend of analytic philosophy, classical scholarship, historical consciousness, and uninhibited curiosity marks Truth and Truthfulness unmistakably as a work by Bernard Williams." ( New Republic)
"Anyone who wants to understand the relations between the relatively arcane issues concerning truth debated by philosophy professors, and the larger question of what self-image we human beings should have, would do well to read Williams's new book. It is a major work." (Richard Rorty, London Review of Books)

What listeners say about Truth and Truthfulness