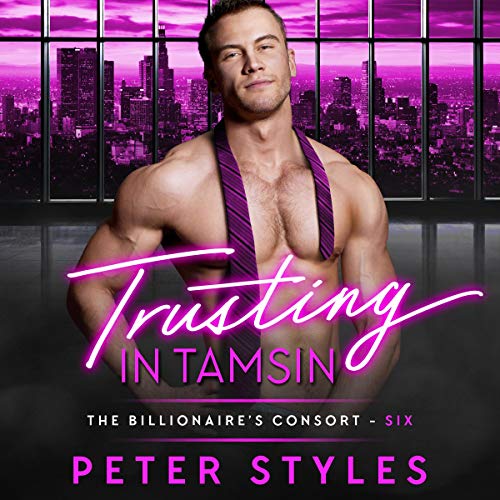 He makes me feel safe again.

Finn Blakely can’t help but be attracted to his new boss. Tamsin is confident and successful - everything that Finn isn’t.

Pursuing him is a completely different matter, though. Finn’s got to keep his head down and his nose to the grindstone if he ever wants to pay off his father’s medical bills.

I only want to care for him.

Christopher Tamsin enjoys breaking new boundaries with his corporate law practice, but when it comes to his personal life, he’s got very specific tastes. He wants someone to nurture and protect, and his new intern hits every one of his buttons.

But with Finn adamantly against accepting anything he sees as charity, Tamsin decides to approach Finn about joining The Billionaire Club as his consort, instead.

Acquiring Finn’s trust and love is more fulfilling than Tamsin ever would have expected, but when the woman who abused Finn comes back to shatter Finn’s illusion of safety, Tamsin is forced to choose: his career, or the young man who has captured his heart?

What listeners say about Trusting in Tamsin

I asked to receive this free review Audible book and wrote this unbiased review. This is a heartwarming story of learning to trust and love. Finn and Tamsin are immediately attracted to each other. Tamsin is a caring dom who strives to win over Finn. Finn is a sub who must earn money in order to keep his father in physical therapy. I enjoyed the character development of these two as they find their way to love. They both are such loveable characters. The narrator has a pleasant voice but it was a little bit robotic at times. It did help when I sped his narration up.

Another good storyline. I’m glad to see the prior characters in the story. Tamsin and Finn are from two different worlds but love brings them together

This series keeps surprising me. I know from the beginning what it is going to be about yet it’s the author’s ability to keep it fresh. This author does a great job of that. Finn is somewhat independent but in need of help. Tamsin is a soft dom which seems to contradict that title. Yet Tamsin does his best to look out for Finn who he is totally attracted to. This story is heartwarming. Finn deserves Tamsin and Tamsin deserves Finn. I’ve enjoyed all the stories I’ve been able to listen to from this series.

Be my consort, be my love


This is a love story between an older, assertive Dom and a young, innocent sub who also happened to be the employee of the Dom. Finn is a young college student working to take care of his disabled father. His mother is abusive and his father is sick. So he’s trying very hard to make money. When Finn worked as an intern for the lawyer Tasmin, it’s spark at first sight. Finn falls hard for Tasmin and he likes him too but he believed that Finn is far too young for him. When Tasmin finally decided to contract Finn as his consort, upsetting news arrived and everything changed.

Sweet, short and enjoyable. I enjoyed this series from Peter Styles. Tasmin is a good Dom who knows how to take care of Finn. They are sweet.

This is a pretty quick listen that's a sweet story. Finn and Tamsin meet when Finn goes to work as an intern at Tamsin's company. They are attracted to one another but there is an age gap and Finn has a lot of responsibilities in his life at the moment. With the help of the Billionaire's Club they start a relationship and I did like seeing their relationship progress throughout the story. Tamsin is great with Finn, he's very attentive and caring and that's just what Finn needs. The narrator just wasn't for me in this one. He's a bit too monotone and his voice seems forced at times. I voluntarily reviewed a gifted copy of this audio book.

So the narration brought this down, there was no enthusiasm, it was just dry. So I couldn't even get into the story.

The deliverance was off... I don't think the narrator was a right fit for this kind of story... The elements was off from the description and did not feel authentic... I went on to get the book but still it was missing somethings.

Right off the bat, I had a had time with the narration. It was very robotic, and the pacing was way off - very slow. I sped it up, but even that only helped marginally. It is hard to tell if it's the narrator or production/editing etc. He has a good voice, so maybe experience and/or a good team is all that's needed.

The story was sweet and okay for me. It was just okay, though. Not sure if it was the narration, the writing, or a combination. The basic plot and characters are good.

Finn and Tamsin are sweet and steamy.

We have two very different MC's, both driven and busy, both needing love, but one with lots of money and one with so very little and needing so much for a good cause.  I enjoyed how their relationship grew and transformed itself.  i enjoyed the supporting characters and the angst in the story felt real and not contrived.

Finn and Tamsin are sweet, steamy, and really connect.   i really enjoyed how gentle and tender their dynamic was.

i really enjoyed the delightful epilogue that really made the story feel complete for me.

This is the sixth book in The Billionaire's Consort series and works as a stand-alone listen.

This is a good listen, Narration is OK some, I dunno robotic I guess here and there but not horrible better than the last one I listened to. The story was sweet but a little underdeveloped for me. I felt like it didn't know where it wanted to go and I would have liked to see a little more on the back stories to understand the MCs better and the ending was a little rushed.

The performance from the narrator is also very important for me. I can't listen to a lot, because my English as a non-native-speaker isn't so perfect to follow a whole story over hours, when the narrator speaks too fast or too sloppy. Normally I have to SEE the person, who is talking to me in English. It took me a little bit, to come into the narrator, but at the end, it worked. I only have to take a few breaks between. I'm just not yet finish with the book, I’m over the half, but I listen enough to give a review.

I enjoyed listening to Barney Parkwynne.

I found that I loved how both characters come together.
How and wanting to please his Dom.

I really liked this story and completely bought the genuineness of,the feelings these two men had for each other. That can sometimes be problematic for me when the plot involves a very wealthy person making an arrangement with a character in financial difficulties. The power imbalance there can feel creepy or coercive. That was never a problem with these two men. The author has written them so both come across as decent, honorable men who really do love each other. The narration was a bit problematic for me at first. It is much closer to the straight read end of the spectrum than the more performance oriented narrations of Joel Leslie, Greg Boudreaux or Kirt Graves which are my preference. It took a bit to get lost in the story with this narrator, but I did and it will not prevent me from listening to this great story again.

This was such an entertaining audiobook.
I really enjoyed listening to this story.
I can’t wait to listen to more stories from Peter.

It was a very interesting and engaging story by Peter Styles. The narration by Barney Parkwynne was a little on the over acted side. Overall not a bad few hours spend.
This book was given to me for free at my request and I provided this voluntary review.