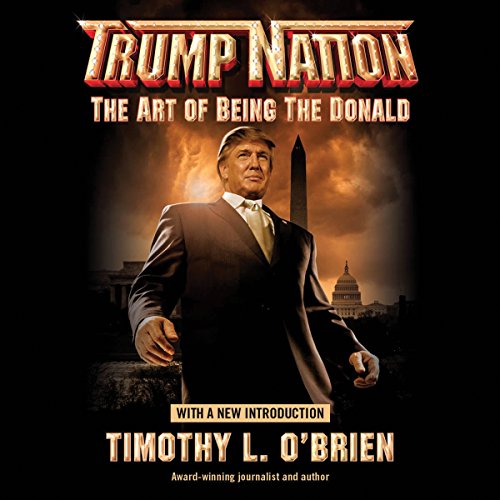 Available for the first time in a decade, the book that launched a $5 billion lawsuit - with a new introduction by the author, in which O'Brien reflects on the recent wave of TrumpMania.

This entertaining look inside the world of Donald Trump is chock-full of rip-roaring anecdotes, jaw-dropping quotes, and rigorous research into the business deals, political antics, curious relationships, and complex background of the leading Republican presidential candidate.

The world of Donald Trump is seemingly full of glitz and glamour. Yet despite glaring cracks in the shimmering façade, the myth of the man has remained impenetrable to a fascinated public. Through interviews with Trump's closest friends - and with Trump himself - award-winning journalist and author Timothy L. O'Brien presents a look inside the life of one of the world's most famous businessmen, pulling back the curtain on the wizard of hype known as The Donald. Prepare to enter...

This "myth-busting biography" (Kirkus Reviews) is the only argument you need against making America a TrumpNation, providing all the necessary details to "separate Trump the reality from Trump the reality show" (USA Today).

What listeners say about TrumpNation

I really don't like the guy and I think he'll lead to America's demise if he's not gone soon.... However this book tells a side of Trump that is already public knowledge but still manages to humanize him.

I think this book shows that mentally he's just a teenager who's completely obsessed with fame and being talked about. It at times can really get across that there are good parts to him (Like his hiring of women at upper management in the 80s, He was one of the first to do that in 1980s NY) .

It also illestrates that he's always done what he wants to do and by his rules.....Unfortunately he has a proper job now and that needs the kind of dedication and attention he puts into reading his own name in daily tabloids.

I was interested in reading this book that was first published in 2005 because it was the book that Trump filed the 5 billion dollar libel lawsuit over. In July 2009 the Judge dismissed the case saying Trump had not proven his case.

The author interviewed Trump and his family and associates as well as researching documents and archives. O’Brien reveals Trump as a very complex man. At the time of the book Trump was 1.8 billion in debt. At times O’Brien seemed sarcastic in his descriptions of Trump’s actions and business. O’Brien say Trump inflates any numbers he reports on including his net worth to the floor count of his buildings. The author paints a picture of a man making decisions on an emotional basis rather than from sound financial facts. He paid high prices for hotels that would never produce the income to pay off the debt. He lost a lot of money on bad business decisions over the years with his father bailing him out. The picture the book reveals of Trump we can now watch daily on the news.

The book is well written but is not exactly a biography. It reads more like a magazine interview. O’Brien reveals the underside of Trump. The book is enlighting and entertaining. Peter Ganim and Timothy O’Brien do a good job narrating the book. The book is short at 3.5 hours long.

I recommend this book for anyone hoping to gain the overview of The Donald's personality & the cursory behind the scenes facts surrounding his most widely known ventures.

This book was the original & spawned a 5B dollar (failed) lawsuit against the author by The Don. There are several books that delve deeper, but this one is perfect for someone unable to stomach more than a handful of hours devoted to the subject.

Hint; this book may inspire you to WANT to go deeper into the subject!

He ruined countless businesses and is now ruining the country. Sadly his base is too gullible and proud to admit they made a huge mistake and the rest of us are paying the price.

If you are a Trump book junkie ( for whatever reason) you will be familiar with much of what is in this book. TrumpNation does bring a lot of Trumpana to the table in a concise logical way. For the new Trump groupie (for whatever reason) this is a must read, for the rest of us groupies it is familiar information well presented.

Meh- it was ok

It's a very short audio book yet it felt long because the narrator is pretty bad. The writing was alright but it's very focused on finances, so if that's what you like then great. But this is not a typical biography

I couldn’t finish it.
The content is very good but the narrator is monotone. Very amateur.

Only 3 hours long. Reader has a boring voice. Very heavy on financials, I thought it would be more of a biography than a financial report.

Wish I could return it to Audible!!

This guy has an agenda and that is to bash our POTUS. Thanks, but your effort is in vain.