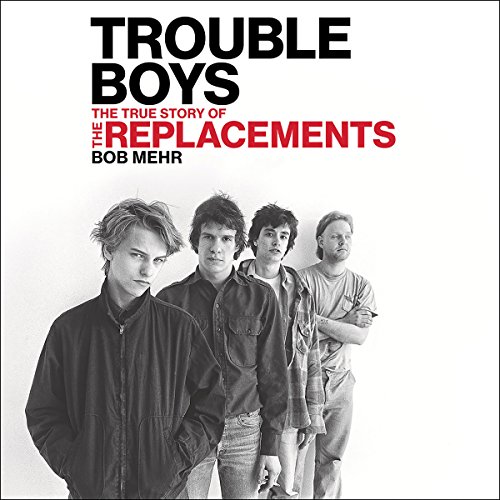 The True Story of the Replacements
By: Bob Mehr
Narrated by: Mary Lucia
Length: 20 hrs and 34 mins
Categories: Arts & Entertainment, Music
5 out of 5 stars 5.0 (10 ratings)

Based on all-new interviews, Trouble Boys: The True Story of the Replacements is the definitive "boigraphy" of one of the last great rock 'n' roll bands of the 20th century. Written with the participation of the group's key members, including reclusive singer-songwriter Paul Westerberg, bassist Tommy Stinson, and the family of late guitarist Bob Stinson, Trouble Boys is a deeply intimate and nuanced portrait, exposing the primal factors and forces - addiction, abuse, fear - that would shape one of the most brilliant and notoriously self-destructive bands of all time.

Based on a decade of research and reporting and hundreds of interviews (with family, friends, managers, producers, and musical colleagues) as well as full access to the Replacements' archives at Twin/Tone and Warner Bros. Records, author Bob Mehr has fashioned something far more compelling than a conventional band bio.

A roaring rock 'n' roll adventure, a heartrending family drama, and a cautionary showbiz tale, Trouble Boys is a penetrating work of biography and a major addition to the rock book canon.

"An in-depth biography of a beloved, exasperating band that never quite made it.... [An] impressively researched and well-rendered biography.... The dynamic that made the band great also tore them apart, as this biography superbly documents." ( Publishers Weekly)
"The definitive bio of the Replacements... Trouble Boys brings the band back to life. Over six years, Mehr interviewed more than 200 people, creating a narrative thick with detail, revelations and emotion." ( Rolling Stone)
What members say
Average Customer Ratings
Overall
Performance
Story

a bit slow to start but incredible once it gets going. the author is extremely well researched and gets very much allows you to enter into the dynamics of the members, supports, labels and wider culture in which the band was operating in

I read this book when it first came out, but I so desperately wanted it in audible format that I sent the author an email begging him to hurry up about it.

Mehr completely fulfilled my wish by choosing the only woman on earth who could do this book justice to read it with all the grit, spit, pathos, bathos and love that it deserves.

Mary Lucia is Paul's sister. She's also our own favorite DJ in the Twin Cities. Her reading about herself being the subject of Achin' to Be made me cry!

Please stop reading this review and go download the Audible version. You'll be so glad you did.

great book from beginning to end! great pace. Very insightful. You'll like it whether you're a fan or not.

For Fans this book is Amazing!!!
Great audible read by Paul Westerberg’s sister. Fans of the Replacements won’t be disappointed.

this will make you love and hate the mats

so good, gritty...i fell in love with them all over again. but like any real love, the faults are on full display.

A compelling and orderly story about a compelling but chaotic band. The book is heartbreaking but if you loved the Replacements you're probably used to that.

straight ahead rock and roll....

I really enjoyed this book and the reading. Yes, I've been a fan of the 'mats for baby years, but any rock and roll fan will enjoy this.

The Replacements deserve a book this good. Like the best of their songs, parts of this read had me laughing out loud, other parts had me almost in tears. Bob Mehr's exhaustive plunge into the story of &quot;the last best band of the 80s&quot; rates among the best rock bios out there, as entertaining as it is reflective. Will probably buy a hard copy to read again, but the narration by Mary Lucia is fluid and spot-on with her occasional dip into Northern speak.

great choice for the reader

the performance was great. the smokey, blue collar voice fit the story and the band perfectly.

the book itself is a pulls-no-punches, extremely detailed account of a great band. no one comes off as good, yet everyone is humanized to an amazing degree.

I generally frown on such long audiobooks as it is difficult to keep my attention for 20+ hours but Trouble Boys went by quickly as it was so entertaining. The narration is a little difficult to get used to at first, but in short time I found it to be excellent. She sounded like a real person and not an actor reading a part. Well done. The story of The Replacement's is fascinating and while this book is extensive, there are some areas I wish would hav been explored in greater detail as well as some over emphasis on a few things. As a whole though I really enjoyed this audiobook and will in fact listen to it again a few more times I am sure.

Nothing matches their music or antics: a book can't either. There never was a replacement