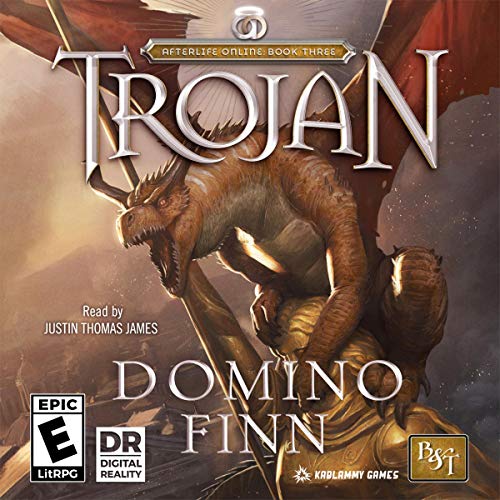 Recruit heroes. Build an empire. Defend it with your life.

Talon and the Black Hats are notorious troublemakers in the online world of Haven. With a history of brash rebellion and legendary deeds, what are champions to do next?

Founding a headquarters is a good start, but the Black Hats aren’t the only empire builders in the land. As crusaders mobilize an army, assassins struggle for independence, and dissidents make waves in Stronghold, Haven’s tentative peace is threatened. The gears of war are churning, and Talon refuses to be crushed in the teeth. Enlisting the help of an old friend, Talon hatches an ingenious scheme to wrangle the embattled citizens of Haven to his cause.

Except there’s another plot shaping the virtual world, one meticulously devised by a ghost in the machine. The true fight, it turns out, started a long time ago, and the real battle may be one against legends.

What listeners say about Trojan

Triple A game you won't find on Steam or Origin

Domino and Justin knock this one out of the park. the most intricate of the Afterlife Online books to date. Really fun bonus content at the end. Grom the Pirate is my spirit animal.

The Afterlife Online series has been one of my favorite serieses in the LitRPG genre, and this book does not fail to live up to that same level of quality. There is a good amount of world building and character growth. I enjoyed the real-life sections as much as the in-game sections which is something I can't honestly say about most LitRPGs. Some of the situations, like their encounter with the sirens, are handled in unique ways.

As for the narration, Justin Thomas James does a superb job. He brings life to the characters in the story. I especially enjoyed his pirate voice.

The fun continues in the third volume of Afterlife Online. There is just something fundamentally enjoyable about these books; the adventure gets under your skin and you can't help but love the ride. This story additionally delivers on expanding our understanding of the goings-on in the world beyond the game. You won't want for action and intrigue!

I can't say this enough this is an amazing series an absolute masterpiece. This book and series shows how truly talented the author is. I absolutely love the way the author is able to write in the complexities and the fluid misdirection of the story without making the story feel sluggish or pill with this nonsensical fluff. This it's how you write a LitRPG.

Did the story keep me engaged: yes
Were there any parts I found annoying: no
Did I feel an emotional connection to the characters: yes
Would I listen to it again: yes

• Story line is imaginative, good world building and character growth. Has good pace, lots of action and interesting characters.
• Justin Thomas James does a great job at bringing the characters to life and adds to the audio experience.

So bongo, bongo, bongo I don’t want to leave the city without my mountain Bongo
Oh no no no no no
Bingle, bangle, bungle I’m so happy with my Bandit I refuse to go

Yeah, this book made me want to sing. It was fun, but then every trip I’ve made to Haven in Domino Finn’s After Life series has been a blast. That song was an old Danny Kaye reference to civilization, which is what this book is all about. It is about teamwork, trust, and faith.

A ton of stuff happens in this installment, and at first I actually thought that it might be an end point, as I think there were several points the story could have concluded, with a lot of unresolved plotlines, that would still have worked. Thankfully, that isn’t the case but it could have been.

By the title of the book, and the dragon on the cover you might have thought that this book was all about protection and prevention, but no. Finn hits you with a lot right off the bat and never lets up. Talon is the victim of an assassination attempt, and soon finds himself on the look for the person or persons who hired the killer. The quest soon spirals into a variety of events that serve to provide us with a high seas adventure, some Oakenguard intrigue, and an epic battle with yet another Titan. I have to add that there are some huge reveals in regards to Talon, Lucifer, and even Tad (talon’s living self).

The only real downside to this story is the complete and utter lack of VArnu Johnson, the greatest tech support that ever hit the pages of a book. He has just one brief cameo, and it just wasn’t enough. I need my Varnu. The only thing comparable is the Tech support scenes in Everybody loves large chests. I wait for my Varnu moments, Domino. I wait for them.

Anyhow, the book is packed so full of action that he has to write another book to keep up. It is a very fun wild ride and this is a world that I deeply love to visit. I am always glad to see another installment of the series pop up.

So, Justin Thomas James racks up points doing his pirate imitation and pretty much has a complete blast rolling through the various voices of the cast. Honestly, I laughed so hard at the party chat at the end of the book, I just envisioned it to have been done in one long amazing take as he literally does every character of any significance in the story, and it would just break my heart to think that he didn’t do it in one long uncut perfect tape of hilarity. I laughed throughout the chat, but the highlight was when he did the voice of the Kraken. I was driving when he did that and I laughed so hard that I almost crashed. My speeding had nothing to do with the peril that Justin put in through his comedic endeavors, either. What I’m trying to say is that he made this book utterly fun every second of it’s run time. I think of all the characters that he does in Afterlife my favorite is Kyle. He has the frat boy partier banter down cold, and the voice fits the brewmaster to utter perfection. I really enjoy listening to Justin whenever he returns to this world, since the first time I’d heard him was on book one of this series, and just listening to him takes me back to those first moments that I stepped into LITRPG. He nails the narration. Plain and simple, and he owns this series. No one else could ever do it now because it would lose a special spark.

MY final score is 8.2 stars. Finn and James are an unbeatable duo. If you haven’t started the series, go back and give it a listen, it is amazing.

Even though I did receive a promo code for this review it in no way influenced my considerations of the material, and in fact, inspired me to be more honest. Getting a code generally makes me harsher as a reviewer as I am more often concerned what someone like Me will decide based on my review.

As seen on the LITRPG AUDIOBOOK PODCAST, please check it out on Youtube.com