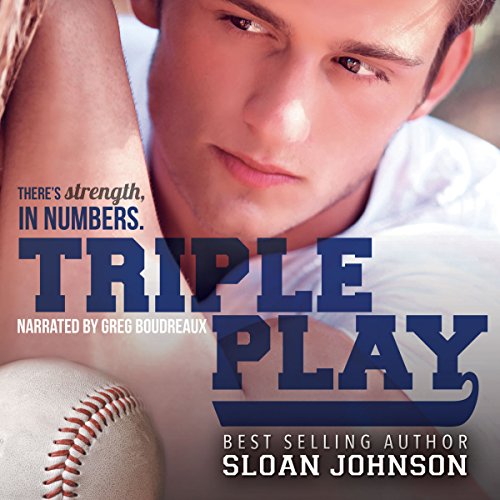 Drew Jackson seemed to have it all. He has a family who loves and supports him, a tight circle of friends, and is a rising star with the Milwaukee Mavericks. Then, it all begins to unravel. Cam, the only man he's ever loved, falls head over heels for Drew's teammate. He makes a critical mistake in the playoffs that he's not sure he'll be able to recover from. And then, his world really crashes around him.

Eric Sapp may no longer play for the Mavericks, but he's still one of the guys. No one could have imagined how much his life would change when he agreed to help his former teammates mourn the end of their run for the pennant. After stopping a brutal attack, Eric is forced to face the feelings that've been growing for his roommate, Drew. That'd be much easier if Drew wasn't hell-bent on pushing everyone away as he recovers. Neither of them were counting on Bryce Shaw. He and Drew enjoyed the one night they spent together, but knew it was unlikely they'd be anything more since they lived in different parts of the country. After Bryce is relocated to help a failing LGBT homeless outreach, he wants to explore something more with the Mavericks' short stop. As much as Eric wishes he could be the one to help his friend, he knows Bryce holds the key to Drew's recovery. Will pushing the two back together be the biggest mistake of his life or will they all learn there is strength in numbers?

What listeners say about Triple Play

I loved the chemistry of this book. The 3 MC were smokin hot. Great to finally see how far Cam wenr in the cooking show. Cody broke my heart the poor kid.

“The truth is, sometimes the injuries caused by words are the ones that take the longest to heal”

The story in these pages is a sad but happy one. They struggle to find their way in this relationship but together they find what works for them. I love that they each have something to offer. They compliment and complete one another.

“Some people go their entire lives without finding someone to love them, and I’ve got two of you. Seems to me I’m pretty damn lucky.”

The narrator on Audible was Greg Boudreaux and I’ve often said that bad narration can kill a book. He did not disappoint in his ability to bring these characters to life. He made the book enjoyable to listen too. His voice is very nice and I have added him to my list of narrators I enjoy.

I needed a little more from the characters

I like the story but I couldn't connect with the characters. I didn't feel like there was a connection between all of the characters with the exception of a sexual connection. I loved them coming together to take care of the children that was in "shelter". I had a hard time dealing with one member getting beat up because of his sexual orientation, although it happens often. I wish there was more to this story. I felt there really could have been something that could have been learned.

Overall I enjoyed the story and where it could have been taken.

Only the second Audiobook I have ever finished.

I already loved this book, and I was wary about the audiobook, as I have tried many before and the narrators have not been good to me

But I listened to the first chapter of Triple Play and I was hooked.

Greg Boudreaux was fabulous. There are so many main characters that they could have all combined into one. But Greg gave each character a very distinctive voice, I was easily able to distinguish who I was listening to.

I would have loved to have listened in one sitting, but I had to make do with listening on my walks to and from work this past week.

This book has also made me go back and try audiobooks again, and I have since purchased about a dozen more, impatiently waiting for me in my library.

this one was odd for me.. idk why but it wasnt my favorite :( i like this series so i was sad it wasnt as good as i was hoping. overall i am glad i listened to it still.