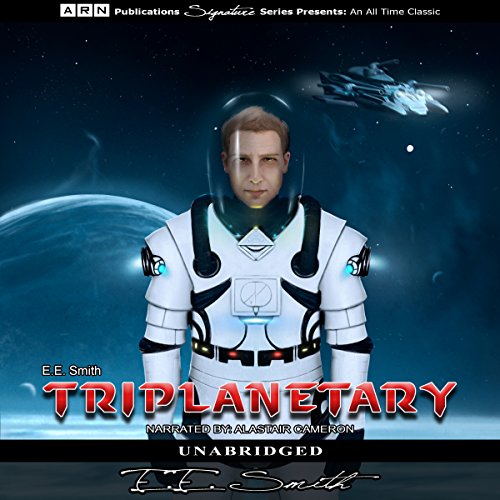 Although Triplanetary by Edward E. Smith was first published in a magazine prior to the creation of Smith's Lensman series in 1938, it was eventually expanded and reworked to cover the period of the storyline before the first Lensman novel.

Written in two parts, Triplanetary introduces the concept of two warring alien races: the Arisians and the Eddorians, whose battles on Earth are unknown to the human race, and in fact the humans are unaware that the Arisians have been secretly and selectively breeding the humans to use as weapons for these battles. From the time of Rome to World War II, the author takes the listener on a lightning-fast journey through Earth's history as the warzone for aliens. The two specially bred lines of humans, the Kinnison and the MacDougall, are described and their importance in the novel is implied. In the second part of the novel, Smith tells the story of humankind healing after the battles with the help of the Arisians. With Arisian technology, the humans are finally able to travel through space. Together with the humans on Mars and Venus, Earth's humans form what they call the Triplanetary League which must stand together as enemies on Jupiter threaten to crush the new alliance.

What listeners say about Triplanetary

thank you for the new narrator

I've been waiting and hoping, for years to listen to my all time favorite series narrated by someone that treats it with respect and not as a japanese cartoon. I look forward to the release of the other books in this series.

The story was great. it has a mix of everything that one looks for in a classic Sci-fi.

A blast from my past.

I first read “Doc” Smith’s books on my summer vacation from college in 1972. I was very pleased to see them available on Audible. I hope Alistair Cameron will continue recording both Lensman and Skylark books. He’s a great reader! Thank you.

Dated, but that's its charm.

Considering that this book was written before Sputnik and before transistors, it's astounding that E.E Smith managed what he did.
If you approach this like an old radio serial, you will not be disappointed. I think the Lensman can best be described as "Flash Gordon done right", or better yet "Flash Gordon written by someone intelligent."

But this is a product of the 50s, and although the author is obviously *extremely* enlightened for a denizen of that decade, there are a few cultural holdovers that might be troublesome for some readers. Nothing overt, nothing insultive, but I did roll my eyes at times at a few perspectives. Fortunately I never cringed. This is high praise; I cringe a lot. LOL

But in the end, this was a lot of fun. I had friends who read this back in high school, and I am truly disappointed I waited another 35 years before finally picking it up. This is a great example of a foundation of modern science fiction.

A nice reading and reminder of a story read so long ago. I hope the entire "Lensman" and "Skylark" series will be available with the same Narrator.
B. Cooper, 03 Sept 2020.

Good enough. Lots of explosions, few ideas. Pretty generic. Heard about it all my life and glad I listened, but not blown away.

A classic in Sci Fi history.

This was the first Sci Fi book that I ever read and it still impresses.