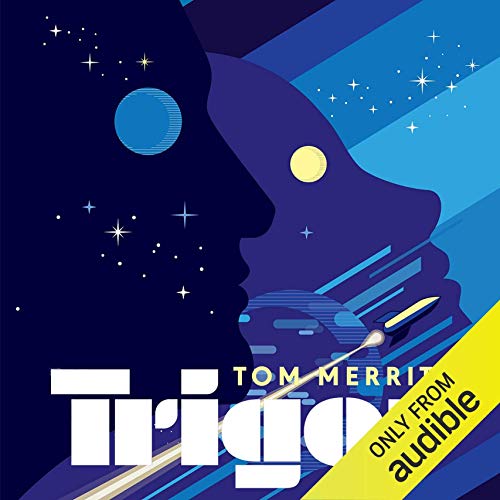 In the sequel to Pilot X, our favorite time traveler returns to save the universe once again in this mind-bending space adventure.

Pilot X is riddled with guilt. After facing the impossible decision to eliminate his own people or save the universe, he is the lone survivor of a time-traveling race.

But Pilot X soon finds that he’s got more than his own guilt to contend with. His timeship Verity detects a signal that someone is working to recreate the dangerous technology that threatened the universe in the first place. Pilot X now sets off to save a universe he no longer recognizes, but feels frighteningly familiar.

What listeners say about Trigor

Great read, after the first book I wondered what pilot X got up to next. An enjoyable and worthy sequel. Also I hope that all AI in the future has the personality of Verity!

good science-fiction written modernly, not pushing any political agenda, just good fun! a must read I will recommend to all

I really loved these two books (the first in the series is Pilot X). It was all a bit confusing for me in the first few chapters of book 1, but once I caught on to the terminology/rhythms of the story and writing, I was totally charmed by the story and characters (the characters really grew on me throughout).
More happens in the first book than the second, but the story-lines for book two are very interesting. Pilot X and Verity are wonderful together. There is real humor throughout the series, and I LOLd in many places in both books. One thing I really like, especially in the second book, is that most of the secondary characters Pilot X meets are good and decent people. There are so many nice people in the stories, and that seems a rare thing to me, in SF these days.
I also want to give a huge shout-out to narrator Kevin T. Collins. His voice characterizations were amazing, and fit the writing's humor perfectly... may have even enhanced it. It is a perfect fit of story and narration.
Okay, again loved both books. I hope there will be a third story with these characters (and in some universe... this one, or one similar, depending on the story's requirements) very soon. Well done, all!

I was excited to see another book in this series and it was good but it didn’t hold the same thrill for me. It also just didn’t really have the same kind of goal and drive the last book did, this one just made it to clear he has no interest in doing anything including finding the plot of the book.

Even Better Than The First

I have to say, I really enjoyed Pilot X, the initial book in the series. I was excited to see that the author came out with book 2, and after reading it, I can't wait till Book 3. Tom Merritt, if you read this, please continue the story! I enjoyed this book even more than the first. It was more straightforward, and a little less confusing in terms of time travel paradoxes, but an excellent read overall. If you enjoyed Pilot X, pick up this book.

<<SPOILER ALERT>> The only criticism I have with this book, is that there is a fair amount of time (in my opinion) spent on a few characters for seemingly no apparent reason. Perhaps it is a setup for a 3rd book, but it wasn't clear to me. I wouldn't let this affect your decision to read it though. I still loved the book. Can't wait for more Pilot X and Verity.

This was an EXCELLENT follow-up to Pilot X. Simple Sci-Fi story that turns into an exotic romance of "human" robot relations with a dash of Time Travel. Dr. Who'esqe but not overly bearing to the point that would scare readers away. The series is ORIGINAL and greatly endowed with brilliance. The first book, Pilot X, was a great setup for this continuation of the stunningly beautifully written Sci-Fi. Definitely worth any amount of money under $200 USD.

Very enjoyable second story in the what I hope will become the Pilot X sage. The story is unique in its continuation while still drawing from the world already established, which is a welcome experience.

If you enjoy a future styled universe with a character who feels real, flawed and freckled (i don't know if really freckled), you will be happy to sit in on this journey.