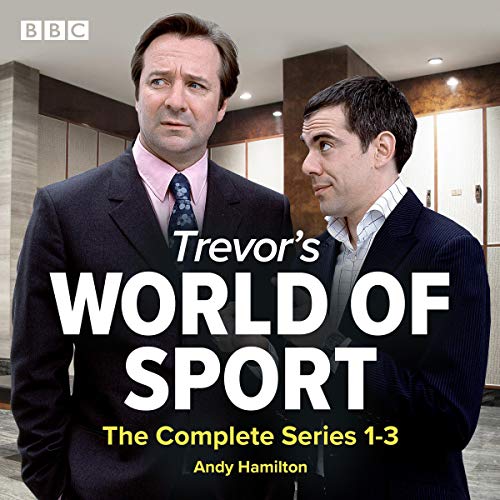 One of the main movers and shakers at TS Sports Stars agency, Trevor Heslop is honest, decent and sensitive. Unfortunately, he works in a world of cutthroats and corruption, with nightmare clients and a rapacious partner with the morals of a barracuda. Add to that his dysfunctional family - estranged wife Meryl and teenage son Toby - and it’s a miracle he manages to stay afloat in the shark tank that is his life.

In these 18 episodes, he grapples with a Buddhist (and a specially trained bear), tackles a footballer who’s just issued his 17th public apology, ends up in court as a witness while trying hard not to lie and proposes taking on the firm’s first Muslim client - but do his colleagues think this is a good idea? As he copes with the ultimate client from hell, Ralph, struggles to keep his dignity and his staff, and tries to save his reputation from being destroyed by a ruthless tennis star, can Trevor retain his decency in an increasingly indecent world?

What listeners say about Trevor's World of Sport

Andy Hamilton is usually good value and there’s a great cast here, led by Neil Pearson. However the character driven jokes are on the whole broad and unidimensional. So whilst it’s entertaining and suitable for easy or background listening, there’s nothing novel or groundbreaking and the jokes at the expense of stereotyped characters can get a bit tedious and wearing (“Hello Ralph”.)
(although, however, the ‘coming from a mile off’ joke about annoying client Ralph appearing on cue whenever the staff chat edged toward unpleasant or unappealing phenomena was actually one of the better running gags!)