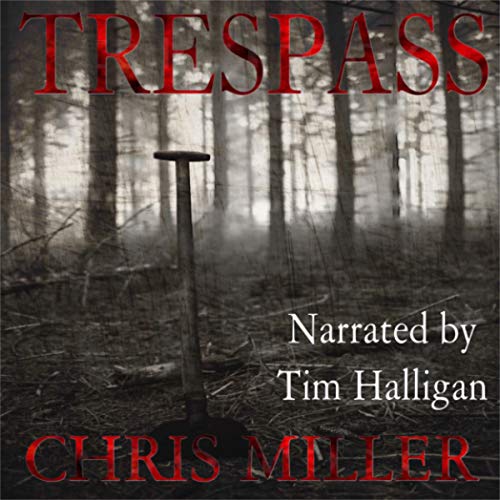 An adrenaline pumping, nerve wracking, intense thiller that will leave you breathless. Frank took his son hunting and what was supposed to be a pleasant time of bonding turned into an absolute nightmare. Out in the middle of nowhere, on their own property, they stumble upon a group of trespassers trying to get rid of a secret so damning they're willing to kill anyone that sees it. Get ready for a relentless pause-resister as Frank dares to fend off the assailants, while racing to get his son help before he bleeds to death. Chris Miller tells a story that any father could relate to. Trespass has what it takes to be a thriller best seller.

What listeners say about Trespass

Great tale! The characters were all well-fleshed, the action and pace were excellent, and even though the story is a brief snapshot, it's memorable and entertaining.

A bond between Father and Son is everything!

Loved it!!! I felt it was a little slow to start but I realize the scene had to be set. Once it was, everything fell into place. The story had a sad turn of events, but the bond between father and son, brought hope and joy to my heart!! That bond is what made the devastation that happened, bearable. The writing was awesome!!!! I don’t expect anything less from Chris Miller!! Love love love. Now, on to “A Murder of Saints.”

What a wonderfully gripping tale, that will make you heart beat faster, as you can almost smell the terror, and desperation of the characters. Well read, and narrated, this book was truly a pleasure to listen to.

Intense to the end!

Wow! TRESPASS doesn’t take long to get your heart thumping and your nails digging into your palm, and then it never lets you relax. Chris Miller is a master of suspense. And Tim Halligan delivers flawless narration. TRESPASS is highly recommend, unless you have heart problems!

After reading my first book by Chris Miller, I hung in suspense and anticipation for the next jaw dropper. With Trespass, I wasn’t at all disappointed. Without giving too many details, I was on the edge of my tractor seat, heart racing faster with every moment that passed as I listened. I can’t wait to consume his next work. Also, hats off to Tim Halligan’s performance as narrator. He really brought the story to life. I can’t remember the music producer’s name, but he did an exceptional job as well. Over all, I highly recommend this audiobook... for those who aren’t weak stomached that is!

Good book even though I disagree with the ending.

The scenario could realistically happen. The narrator did a great job. I disagree with how the story ended and their position on guns. After everything they went through, I would expect them to keep their guns for protection.

I liked the story even though it was short. The reader was a little to loud and distracted from the story.

a nightmare brought to life

I read Trespass and loved it so much I wanted to listen on audible as well. Tim Halligan does an incredible job at bringing Chris Miller's nightmare to life. A relaxing hunting trip turns into a living nightmare. Kill or be killed are the only options as a father must do the unimaginable to save his son. Mr. Miller is a talented writer who know how's to write a story that pulls you in right from the start. I you haven't read/listened to a Chris Miller book, what are you waiting for ? Don't miss out on a great Indie writer.

Trespass was tightly written and keeps the reader (or listener, in this case) on the edge of their seat. Being a father, I could wholly relate to the need to protect your son. This made the story that much more intense for me, I was there!!! The action was taught and moved at a very quick pace. I highly recommend this to anyone who wants a quick, edge of your seat thriller to entertain your afternoon.

The narration was nicely done. The voices were varied and easily understandable. His pace and cadence added to the intensity of the story.

I requested a free review copy of this audiobook and I am leaving an honest and voluntary review.

Good concept but very badly written and narrated. Don't waste your money or credit on this turkey