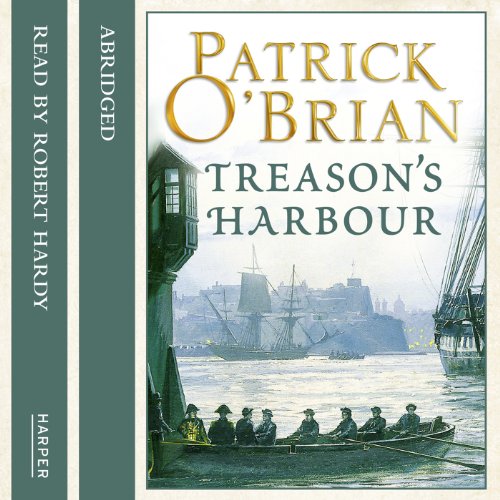 The ninth book in the Aubrey/Maturin series.

Uniquely among authors of naval fiction, Patrick O'Brian's characters develop with experience, and although the Jack Aubrey of Treason's Harbour has a record of successes to equal that of the most brilliant of Nelson's band of brothers, and is no less formidable or decisive in action, he has grown wiser, kinder, and gentler too.

Much of the novel's plot concerns intelligence and counter-intelligence, the field in which Aubrey's friend Stephen Maturin excels, and there is action and excitement aplenty, but it is the atmosphere of Malta that is so freshly and vividly conveyed here, crowded with senior officers waiting for news of the French and wondering whether the war will end before they get their turn for prize money and fame.

"Aubrey and Maturin are men to believe in as they come to terms with their comfortable flaws against an exceedingly accurate Maltese backdrop in this, the ninth Aubrey novel." ( The Times)

If you could sum up Treason's Harbour in three words, what would they be?

Great writing from the start to finish.

Rediscovered Patrick O'Brian, been reading his novels for over 20 years and this experience put a new spin on them