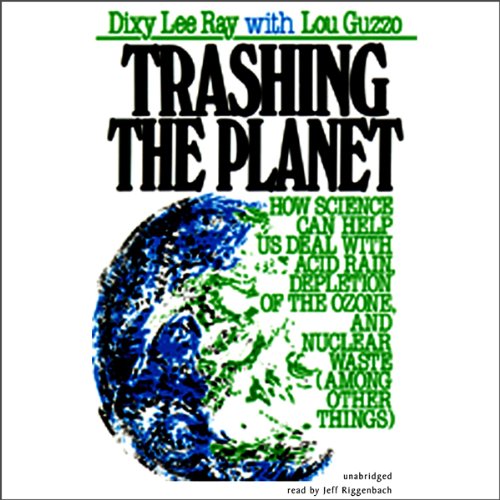 Trashing the Planet is the one book you need to get a common-sense grasp on the contentious issues of environmentalism, where science and politics overlap and well-meaning idealism turns to counterproductive eco-terrorism. Dixy Lee Ray, a marine biologist and former chair of the Atomic Energy Commission, calls for environmentalists to regain a sense of perspective and not let their ardor carry them into the realm of “noble lies.” Dr. Ray exposes how little the public knows about the environment, how piddling are man’s influences upon it—volcanoes shoot more pollutants into the atmosphere than do all of man’s industrial activities—and how complex are the interactions of natural phenomena. Reminding us that “a well-tended garden is better than a neglected woodlot,” Trashing the Planet is a breath of fresh air in the current debate dominated by rhetorical extremism.

What listeners say about Trashing the Planet

So thankful for another well researched perspective on the environmental issues...her experience with working with presidents and as governor of Washington was especially interesting.

This book claims to evaluate scientific research and positions but is written by politicians and attempts to influence the reader away from environmental issues. The “best friend business ever had” probably doesn’t have the prerequisite knowledge or authority to dissect well know environmental issues!

Required Reading For Both Sides of the GreenDebate

This book does as good a job as any I've read at identifying the issues, investigating the substantive facts and drawing reasoned conclusions without jumping to the same politically-driven, pre-determined positions that we've heard ad nauseum in the pet media of both sides. It seems the more I learn about these often complex scientific issues, the more I have come to realize that both sides have some truth in their positions, but both are substantially wrong in the rigidity, dogmatism and simplistic jingoism of their stances and solutions. And that uninformed rigidity seems like a bigger obstacle to finding a workable solution to these problems than just about anything else.

In other words, there's way too much politics and not nearly enough science in the Green debate these days, in part because the science is often more complex and nuanced than a factoid on a flyer or a talking point on some pundit's cable TV show. But the authors of "Trashing the Planet" do a phenomenal job making the science not only understandable, but genuinely intriguing, and that alone should recommend it for wide consumption. I really enjoyed reading this book, and was pleasantly surprised at the way it pulled me through the chapters.

That said, I would not recommend this book if all you want is to have your existing views validated, whatever they may be. This book changed my perspective on a few things I thought I understood better than I actually did, and gave me a deeper perspective on many others. To me, that's the sign of a truly well-written, well-argued book. There will surely be folks on both sides of the debate who will find simplistic, politically-sanctioned ways to trash "Trashing the Planet." But to anyone with even a shred of doubt, a flicker of curiosity or a glimmer of desire to learn more about subjects that should transcend politics but rarely do, this book is a treasure.