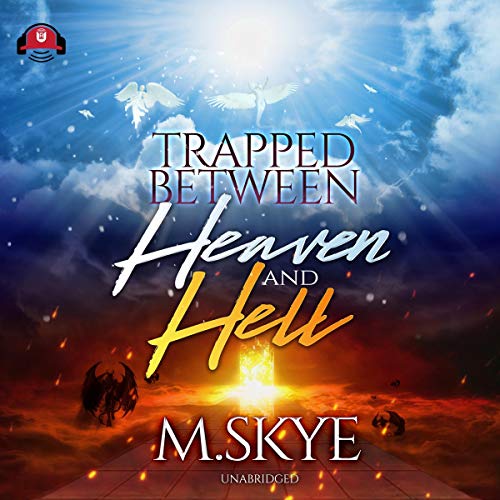 Trapped between Heaven and Hell

A host of unexpected events lead to the revelation of dark secrets between Tyree’s and Mia’s families. With murder, corruption, and duplicity standing in their way, can Tyree keep his family safe and rekindle a love he once thought was lost forever?

After the kidnapping of his son, Tyree Johnston’s marriage to Mia, the love of his life, fell apart. Now, two years later, Tyree has their son Kyan for the summer, and he is unprepared for Mia’s return to their hometown. Trying to move forward with his life, Tyree finds himself stuck between what his heart wants and what his head says is right.

Mia left for Paris the minute her divorce was final, but when her sister-in-law tells her that Kyan needs her, Mia is on the first flight out. Besides, it’s about time she faced Tyree so they can try to come together as co-parents for their son's well-being.

What listeners say about Trapped between Heaven and Hell

story is all over the place

i had to finish but it was hard to do so. MC changed mind more than underwear, constantly saying things he didn't mean like he only had brain capacity for what was in front of him at that time. pheww glad this book finished, the story goes on without me...

I listed up to the 29th chapter while I was working and had to turn it off. It was that bad and boring to me. I like the deep voice narrator but he didn’t do to good with this one.

Great plot but the stories in these novels are not realistic. For example why did Tyre not wait on the block to see who Rene called. His brother is in the same place the hospital he would be there for another hour. He’s not dead so why run there when you could resolve a major treat to your child. Stupid writing!

Loved the narrators voice- I found it be sexy, intense and genuine. Good Story line

This narrator was horrible. He us no Jakobi Deim. He made the book A NIGHTMARE!!!!! Difficult listen...won't get another book if he us the narrator! Sucked!!!!!

Better Than I Expected

This was a good storyline....I enjoyed the twist and turns of the plot....I'm wondering if there will be a book 2....because truthfully we were able to get to the root of why one father John Johnston allowed greed to overtake him...but, we didn't receive any resolution about the other father Richmond Livingston and why his behavior was so sinister and how he was able to escape from federal custody.