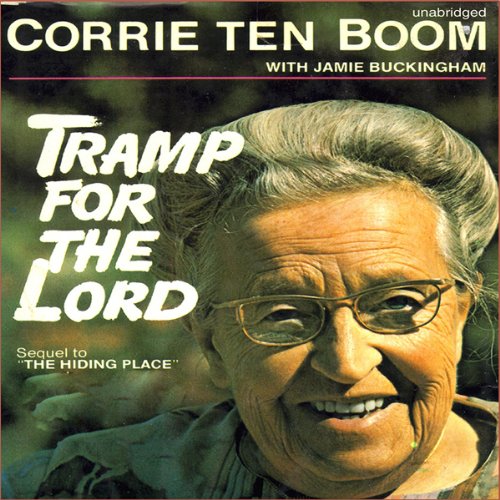 Tramp for the Lord

Tramp for the Lord

After her release from a concentration camp, Corrie ten Boom set out to become what she called a “tramp for the Lord,” traveling around the world at the direction of God and proclaiming his message everywhere. Throughout her life-long experiences, she learned a few lessons in God’s great classroom, which she here shares with listeners.

Corrie introduces us to her former prison guard, who asks her for forgiveness; a war-crippled lawyer with a soul as twisted and deformed as his limbs; a travel agent who learned that her ultimate destination could not be found on any map; a missionary mother whose unwanted babe ended up saving her life. All these touchingly human vignettes from her life and travels are intertwined with the unique teaching truth that sustained Corrie ten Boom throughout her days.

This moving story begins where Corrie’s beloved best seller The Hiding Place ended. This modest woman, who was also one of the most remarkable evangelists of our time, shows that miracles really do happen. Her own life was living proof.

Corrie ten Boom (1892-1983), born in Holland, has written devotional books and has traveled the world speaking about triumphant living.

This is the second book read by Wanda that I have listened to and I love the way she interprets it with such passion. Thoroughly enjoyable and profoundly filled with Gods redemption story.

so true. what God did for Corrie he can do even more for you. just take God at his word. God is faithful.

great book to inspire you

this is my second time with this book. it is amazing and inspiring. I want to forgive completely everyday.

Corrie ten Boom's simple faith and deep love for God are contagious. Her stories are moving and her applications simple. She doesn't pile on the guilt and yet she makes me want to work harder then ever before for God! It might help awaken your first love!

Great story by a great lady of faith. very well written. Enjoyed every wor of this wonderful testimony !

What an amazing book about a truly amazing woman of God! Corrie Ten Boom’s life shows how Jesus can use a person who is totally surrendered to Him.

A good example of what a Christian life ought to be. Not without great difficulties Corrie Ten Boom led a spirit filled life. God does great things with those who give their lives to Him.

Corrie Ten Boom's life is an amazing adventure. Her perspective and insight is so rare and honest. I love the narrator's voice and could listen to her read forever more.

What an amazing testimony she has. Loved every word. She motivates me and teaches me. Wow!

Journey of a Faith Filled Woman

This book is a true treasure and a must listen as it tells the story of Corrie Ten Boom’s life as related through many antidotal accounts how she allowed the Lord to work in her life, and the further development of her faith.

Definitely worth a listen. I love it how giants of the faith such as Corrie describe themselves as mere sinners who the Lord rescued. I am so encouraged to follow his leading.

Definitely worth your time. It was especially encouraging hearing about forgiveness and "closing the circle." So important for true freedom. This is a book I need to "eat-on" so I bought a copy.

such an inspirational read, what a tremendous lady Corrie was, she kept her faith through all the hardships she and her family suffered and was still able to forgive.

Just as good as 'The Hiding Place'

This is every bit as inspirational as the more famous Hiding Place. Definitely worth buying.